University of Colorado Center for Bioengineering 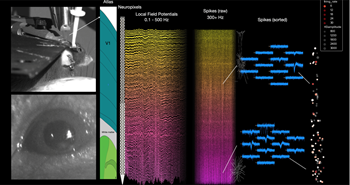 The mission of the Denman Lab is to understand neural dynamics: how populations of neurons generate sensory perceptions and other behaviors.

We use high-density extracellular electrophysiology, quantitative psychophysics, in-vivo imaging, optogenetics, tissue clearing, and ex-vivo whole brain imaging and computational methods to study the dynamics of populations of single neurons. In-vivo experiments are performed in the context of a custom virtual reality environment. We seek not only to apply state-of-the-art tools to the study of neural dynamics, but also develop new tools for recording and modulating the action potentials of single neurons in-vivo. We collaborate widely with the neuroscience community at CU.

The Denman Lab takes an experimental approach to studying neural computations. To do so, we first focus on quantitative understanding of the behavior under study, using immersive virtual reality environments and/or operant conditioning tasks. We use our methods to record from large populations of *interconnected* neurons in awake, behaving animals. Our recording target populations of single neurons within and, importantly, across brain areas. With this data we can correlate traditional and novel metrics of neural activity with behavior, seeking to understand how neural activity represents and transforms information as it flows across the brain.

We also test hypotheses for the role of observed neural dynamics, such as those generated from the correlative experiments described above, by inducing specific neural dynamics through both open-loop and feedback-controlled neural modulation optical and electrical neural modulation. This work aims to improve existing and create novel tools for the specific control of neural activity.

The Center for Bioengineering (SOM)