Many of the faculty members in the Department of Pharmacology utilize the human genome sequence and molecular structure to define how and where pharmacological processes occur. Knowledge of the human genome allows our faculty to define the target of pharmacologically important molecules. Defining the molecular structure of the target protein allows pharmacological mechanisms of molecules to be defined. The centers and facilities that aid in this research include the DNA Array Facility, the Center for Computational Pharmacology, the Mass Spectrometry Center, the Nuclear Magnetic Resonance Center, and the X-ray Crystallography Center. 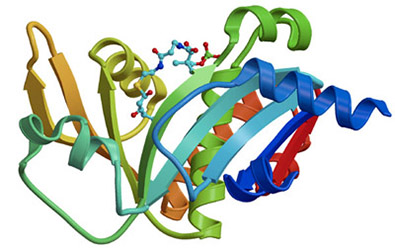 The first three-dimensional structure of an Eps15 homology domain bound to an endocytic peptide signal has been solved in the NMR Center. It reveals how the Eps15 protein contributes to the regulation of cell growth. The structure of a domain of the EEA1 protein bound to a phospholipid has been determined, revealing how membrane lipids are specifically recognized. Proteins that package viral DNA and bind alcohol and neurotransmitters are also being characterized. Understanding the structural mechanisms of these proteins will inform the design of new therapeutic agents for cancer, Parkinson's disease, and alcohol toxicity and addiction.

Mass Spectrometry Center
For the past three decades, the Department of Pharmacology at the University of Colorado School of Medicine has maintained a presence in the advancement of mass spectrometric techniques to solve difficult problems in the pharmacological sciences.

In the past, this has taken form in the elucidation of chemical structures of biologically active lipids derived from arachidonic acid and delineation of the biochemical mechanisms involved in the metabolism of these important eicosanoids. Mass spectrometry has also been a central tool to expand our understanding of the complexities of eicosanoid biosynthesis within cells in tissues.However, with the post-genomic era, mass spectrometry has now emerged as a central technique that permits precise identification of proteins expressed within cells. Investigators in the Department of Pharmacology and colleagues in the Department of Pharmaceutical Sciences (School of Pharmacy) have installed the new generation of mass spectrometric instruments, including:

Ion trap mass spectrometers (MSn capabilities) to address the identification of expressed, as well as to assess postranslational modifications of proteins; (events that are not programmed into the genome.)

Current projects include the study of chromosomal protein-DNA complexes, structural studies of tumor viruses and viral protein interactions, DNA modification enzymes, and proteins involved in bacterial pathogenesis. Learning more about the structure and function of the molecules active in these systems will advance our understanding of fundamental molecular processes in the cell and aid in fighting human disease.