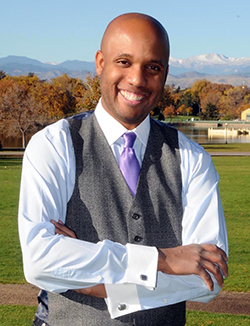 The child of Trinidadian immigrants, Dr. Tamaan Osbourne-Roberts spent his early years moving frequently. With a father who was a financial professional in the U.S. Air Force, and a mother trained as a STEM educator, his interests in science, service, and communication developed early, as a function of his family’s values and his ever-changing environment.

Following graduation from the International Baccalaureate program at George Washington High School in Denver, he chose to attend Williams College as a Tyng Scholar, majoring in biology and English. Awarded the college’s highest honor, the William Bradford Turner Citizenship Prize, at commencement, he went on to medical school at CU, where he served as student graduation speaker, and where he remained to pursue his family medicine residency.

Following residency, Dr. Osbourne-Roberts entered the Colorado Health Service Corps, beginning his career-spanning service to underserved communities.  As a naturally-talented polyglot with a multicultural background, he gravitated towards the care of immigrant and minority patients, where his ability to help patients navigate multiple languages and cultures  — including the cryptic ‘hidden’ language of healthcare — would prove most useful.

Fully embracing his roles as an interpreter and connector, and believing the Hippocratic oath’s exhortation to ‘provide all measures which are required’ transcends the walls of hospitals and clinics, he structured his health policy career to mirror his clinical focus.  Starting in medical school, with co-authorship of policy leading the American Medical Association to support the Affordable Care Act, he has gone on to co-author national policy on excessive use of force in policing, and limiting the use of sedative restraint in law enforcement situations.  He has served in multiple local and national policy roles, including as Chief Medical Officer for Colorado Medicaid, and as President of the Colorado Medical Society, where he was the first person of color — and at 37, the youngest person — to serve in that role in the organization’s 143-year history.  Most recently, he returned to school as a Pozen-Commonwealth Fund Fellow in Health Equity Leadership at Yale University, where he is pursuing his MBA in hopes of bridging the worlds of public health and business, in service of the most vulnerable.

A devoted husband to his wife, and a loving father to two children, he enjoys capoeira, freediving, spearfishing, mountaineering, cooking, and traveling to Trinidad Carnival whenever his busy schedule allows.