Down Syndrome and Its Clues About Alzheimer's Disease

We believe that a focus on Down syndrome will provide important clues about Alzheimer’s disease. 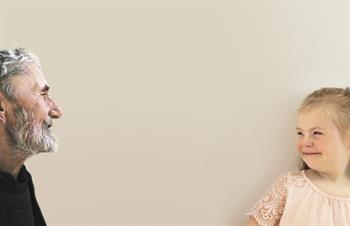 Support for our focus on people with Down syndrome comes from Dr. Potter’s discovery that every person with typical age-related Alzheimer’s disease develops many DS-like (trisomy 21) cells and other types of aneuploid cells (cells with abnormal numbers of chromosomes) throughout their bodies, including neurons in the brain. His lab has recently discovered that other neurodegenerative brain diseases also appear to be linked to trisomy 21 and other chromosomal aneuploidies, suggesting that aneuploidy-focused prevention and treatment strategies may apply to many brain diseases. Notably, Colorado is home to 4,000 people with Down syndrome, and the CU Alzheimer's and Cognition Center has strong partnerships with the Linda Crnic Institute for Down Syndrome at the University of Colorado, the Sie Center for Down Syndrome at Children’s Hospital Colorado, and the Global Down Syndrome Foundation in Denver.