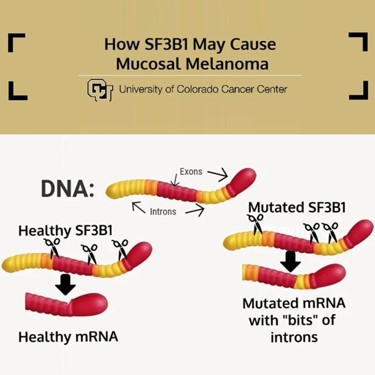 Not all melanomas are created equal. While most melanomas appear on the skin as the result of sun exposure, a small subset of melanomas arise spontaneously from mucosal tissues. And while targeted treatments and immunotherapies have dramatically improved the prognosis for many patients with sun-associated melanomas, these treatments are ineffective in the mucosal form of the disease. A University of Colorado Cancer Center study published today in the journal Melanoma Research uses the unique resource of over 600 melanoma samples collected at the university to demonstrate, for the first time, novel mutations involved in mucosal melanoma, paving the way for therapies to treat this overlooked subtype.

“The treatment for melanoma has gotten pretty good in the past five years. But this is a different disease and the treatments that work in sun-caused melanoma don’t work in non-sun melanoma,” says William A. Robinson, MD, investigator at the CU Cancer Center and the Rella and Monroe Rifkin Endowed Chair of Medical Oncology at the CU School of Medicine. Robinson founded the melanoma tissue bank at CU, which has grown into a major national resource for scientists studying the disease.

“We have seen SF3B1 mutation in chronic lymphocytic leukemia and in myeloid dysplastic disorders, and now we show its importance in mucosal melanoma,” says Aik Choon Tan, PhD, investigator at the CU Cancer Center and associate professor of Bioinformatics at the CU School of Medicine.

Because any sample of cancer cells is likely to contain thousands of mutations, advanced analytic tools are needed to distinguish harmless “passenger” mutations from the dangerous mutations driving the disease. For this purpose, the researchers used the computational tool IMPACT, developed in the Tan lab, to sort functional from missense mutations and to cross-reference candidate mutations with those previously reported in other cancer types.

“For the first time, this process demonstrates the functional role of SF3B1 in mucosal melanoma,” Robinson says.

The mechanics of SF3B1 are complex and only partially understood. Basically, the gene makes a molecule involved in preparing other genes for expression, helping to distinguish between regions of genes that should be manufactured and those that are silent genetic filler. Technically, SF3B1 sorts “exons” from “introns” – helping to cut and splice genetic code into the streamlined version that forms the plan for a protein. Unfortunately, if SF3B1 is mutated, this cutting and pasting can go awry in ways that introduce unintended bits of introns along with the intended bits of exons into the blueprint.

“Most often when material from introns is improperly included with exons, the result is nonsense proteins that go on to quickly degrade, meaning that cancer may use this strategy to downregulate the production of certain anti-cancer proteins,” Tan says. “On the other hand, an SF3B1 mutation could result in changes to the protein that are helpful to cancer cells, meaning that mucosal melanoma may be using this strategy to upregulate the production of proteins that can drive its growth.”

No matter if SF3B1 is nixing good proteins or boosting bad ones, the current project shows that stopping its action could benefit patients with mucosal melanoma. In fact, the researchers point out that phase 1 clinical trials are already underway for compounds targeting this gene in other cancers, meaning that the time needed to apply a similar strategy to mucosal melanoma could be dramatically shorter than if they had to start from scratch.

The group plans to continue exploring the mechanics of SF3B1 while also pushing forward with the preclinical work needed to form the rational basis for targeting this gene in patients with advanced mucosal melanoma.

This work is partly supported by the National Institutes of Health P30CA046934, Cancer League of Colorado, the David F. and Margaret T. Grohne Family Foundation, the Rifkin Endowed Chair (WAR), the Amy Davis Foundation and the Moore Family Foundation.