Professor and Vice-Chair of Research 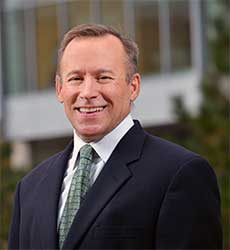 Diabetes is a debilitating disease affecting millions of people worldwide, and is one of the leading causes of blindness among Americans over the age of 40. Diabetic eye disease often goes undetected in the early stages, and can lead to vision loss if not treated. We seek to develop novel therapies to prevent the beginning stages of diabetic eye disease, particularly for patients who develop diabetes early in life. With our team of collaborators, we have discovered several natural compounds in plants that show promise in their ability to prevent some of the early steps of diabetic eye disease. As these types of materials are developed from natural constituents of fruits and berries, they may satisfy the need for therapies that are safe and effective for patients who are faced with a life-long need for protection. Our goal is to rapidly translate our discoveries into new therapies that can be delivered to patients worldwide. Our research also addresses therapies to protect against cataract, a condition that has no medical means of prevention but still represents the world’s leading cause of blindness. We seek to identify new ways to prevent biochemical changes in the eye that underlie cataract formation, and to develop new medicines that may postpone or completely eliminate the need for cataract surgery. 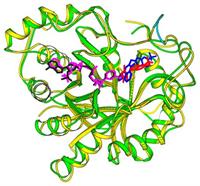 Diabetes mellitus is a debilitating disease affecting millions of people worldwide, and is one of the leading causes of blindness among Americans over the age of 40. According to recent data from the National Eye Institute, diabetic retinopathy affects over 4 million people in this age group). Patients with diabetes are also at increased risk for cataract. Damage to these tissues results from biochemical and metabolic alterations occurring in response to chronic hyperglycemia. Considerable evidence suggests that products of aldose reductase, the first enzyme of the polyol pathway, may represent a biochemical link between hyperglycemia and diabetic complications in the eye and other major organ systems. Inhibition of aldose reductase offers promise as a means to delay the onset or progression of diabetic complications.

Recent studies have shown that aldose reductase is a member of a large enzyme superfamily of aldo-keto reductases (AKR). These enzymes may play a role in the disease process leading to blindness in diabetic patients. To better understand the potential involvement of the AKRs in diabetic complications, we have begun using genetic techniques to dissect out the important players. We recently used yeast genetics as a powerful genetic model to probe the functional conservation of AKRs. Our studies demonstrated that aldose reductase, the prototypical AKR in humans, can rescue phenotypes in mutant yeast that had been genetically depleted of their AKR genes. We are now moving to the mouse system for our genetic studies. Transgenic mice have been produced for expression of AKRs in selected target tissues of diabetes. Conditional knock out mice are also being studied to determine the roles of individual AKR genes in the pathogenesis of diabetic cataract and retinopathy. 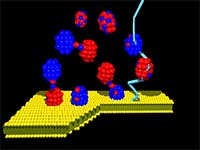 Human alpha crystallin is a large protein complex composed of 30 to 40 copies of the A (alphaA crystallin) and B (alphaB crystallin) chains in roughly a 3 A to 1 B ratio. Both alphaA and alphaB crystallin are ~20 kDa subunits, making the A/B heteropolymer between 600 and 800 kDa. It can represent up to 50% of the total protein in vertebrate lenses, and both subunits have significant homology to small heat shock proteins such as mouse HSP25 and human HSP27. However, the biological role(s) of alpha crystallin are not yet firmly established. It is thought to give vertebrate lenses their refractive and transparency properties through short-range ordering, which likely results from the repulsive behavior of the native protein. Alpha crystallins have been shown to suppress stress-induced aggregation of proteins in vitro, reflecting their potential in vivo role in maintenance of lens transparency. Alpha crystallin also interacts with lens intermediate filaments, namely the beaded filament, actin filaments and monomers, and plasma membranes. The possible biological significance of these interactions is still unknown. 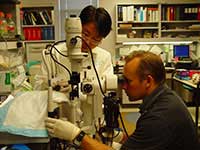 The long term goal of the alpha crystallin project is to gain a better understanding of the possible roles of alpha crystallin in the fiber cells of the vertebrate lens. To accomplish this, we are utilizing fluorescence-based binding experiments to get a detailed characterization of the macromolecular interactions in which alpha crystallin is involved, which includes protein-protein interactions with partially denatured substrate proteins as well as with other subcellular elements, such as the plasma membrane. Other methods of study include the use of confocal microscopy in conjunction with immunocytochemistry in our model organism, the chicken embryo, as well as general molecular biology techniques such as site-directed mutagenesis, protein expression in E. coli, and kinetic "chaperone-like" activity assays. We have created transgenic mice that express epitope-tagged versions of human alpha A crystallin. These mice are being used as animal models for autosomal dominant cataract diseases in humans.

Detailed physical characterization of the interactions undergone by macromolecules is required for a complete understanding of a molecule's function and mechanism. Knowledge of binding parameters is crucial to nearly every aspect of biology at the molecular level, including enzyme kinetics, signal transduction, DNA replication and gene expression.

All members of the aldo-keto reductase superfamily require a cofactor for activation and catalysis. In order to gain insight into the kinetic mechanism and biological function of aldose reductase and other aldo-keto reductases, we are studying the interactions between proteins and their cofactors. The intrinsic fluorescence change seen when NADPH binds to aldose reductase (see above pictures for crystal structures) can be used to measure the amount of cofactor bound. Using fluorescence measurements, we can quantitatively compare the binding characteristics of aldo-keto reductases. (The binary complex of human aldose reductase with NADPH bound is pictured) This gives us another method (second to kinetic measurements) for analysis of the various reductases as well as any site-directed mutants produced in the lab. 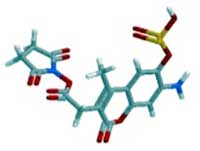 A majority of the binding work in our lab centers around the small heat shock protein alpha crystallin. Alpha crystallin is the major protein component of the vertebratelens and is thought to play key roles in both

transparency through short range ordering and transparency maintenence through chaperone-like activity. It is also well established that this protein interacts with cytoskeletal elements and the plasma membrane, though no clear function is known for such interactions. We are using a small fluorescent molecule, called Alexa Fluor350 from Molecular Probes, to tag recombinant protein that has been expressed and purified in our lab. These fluorescent conjugates allow us to use fluorescence to detect the binding of alpha crystallin to various substrates. We plan to expand these studies to include other subcellular ligands for alpha crystallin in the hopes of determining the functional significance of these interactions in vivo.

We have also used cloning to fuse the alpha A gene to the gene for Green Fluorescent Protein (GFP). We can then use fluorescence to monitor intermolecular interactions. When expressed in bacteria, GFP gives off a strong fluorescent signal that fills the bacterial cell volume. Alpha-GFP fusions in bacteria appear as bright spots because the protein forms insoluble inclusion bodies. Soluble alpha-GFP protein is easily solublized using a chaotropic agent. 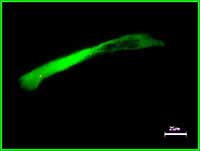 Our work mostly revolves around in vitro characterizations of proteins that are involved with diabetes, sugar metabolism, or the vision system. However, making the leap from in vitro to in vivo can sometimes be difficult. As a result, we must utilize model organisms to paint an accurate picture around function of the protein of interest.

We are using transgenic mice and micro-injection techniques in the embryonic chick system in our studies of the alpha crystallins. In collaboration with Steve Bassnett's laboratory, we have used microinjection to introduce a plasmid that drives the production of GFP-tagged alpha crystallin. Immunocytochemistry in conjunction with fluorescence microscopy can be used to determine expression patterns as well as intracellular localization. Transgene expression in the mouse is being studied using immunostaining against an epitope fused with the alphaA crystallin gene.

Our lab uses enzyme kinetics as the primary method for in vitro aldo-keto reductase characterization. The protocol for taking such measurements involves following the oxidation of the cofactor, usually NADPH or NADP, using a UV/Vis spectrophotometer. Oxidation of NADPH corresponds in a loss of absorbance at 340nm. Human aldose reductase follows traditional steady-state Michaelis-Menton kinetics with an ordered bi-bi mechanism. Below are examples of data for human aldose reductase with glutaraldehyde as the substrate. Although members of the aldo-keto reductase family show some overlap with respect to substrates, the relative affinities and overall activity towards different substrates are not equal. Obviously, the specificity of an enzyme is key to the elucidation of its biological function. As a result, one of our ongoing goals includes the use both site-directed mutagenesis and kinetic measurements to identify the determinants of specificity within different regions of related aldo-keto reductases.