Kathleen Barnes: This Is What People Are Talking About When They Say ‘Big Data’. 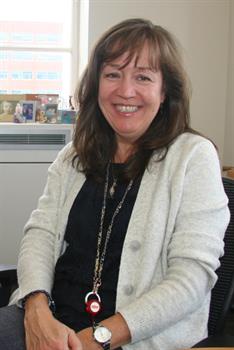 ​Barnes is building CU's expertise in health data and biocomputing into a world-class personalized medicine program.

In November 2015, Kathleen Barnes, PhD arrived at the University of Colorado Anschutz Medical Campus poised to lead two new initiatives, taking the reins as the director of CU's new Center for Personalized Medicine and as head of the newly-established Division of Biomedical Informatics and Personalized Medicine in the CU Department of Medicine.

Barnes spent the previous 23 years at Johns Hopkins, where her lab studied the genetics of complex diseases. But to understand her affinity for the 'big picture' of personalized medicine, it helps to start at the beginning of her academic career, when she received her PhD from the University of Florida in Biomedical Anthropology, a branch of anthropology focused on learning how human behavior and culture impact health and disease.

"In hindsight," she says, "it was a perfect precursor to what we now call personalized medicine: taking into account our genetics, which make us biologically what we are, and our environment, both the microbiome and larger environmental forces, and then the most underappreciated aspect, which is our behavior, cultural mores and social norms."

The power of bigger databases

Barnes completed her postdoctoral training at Johns Hopkins in immunogenetics, then launched her research group there, originally focusing on allergic diseases (primarily asthma) and expanding into other complex, multi-gene lung diseases.

One important breakthrough made by Barnes' group was in understanding the role of endotoxins in the gene-environment interactions that influence development of asthma. Previous work by others had demonstrated that a particular gene mutation seemed to protect against asthma and allergies in individuals exposed to endotoxins (toxins released by certain types of bacteria), but Barnes' group performed research in Barbados revealing that with very high endotoxin exposure in tropical urban environments, the very same mutation becomes a risk factor for developing asthma. "This was one of the first pieces of evidence showing the complexity of gene-environment interactions, and the very intricate balances of environmental exposures," says Barnes.

Barnes' research has also focused on understanding to what extent genetics can explain health disparities in complex diseases. For instance, globally, individuals of African ancestry suffer more from asthma than European populations or other groups. Barnes' group has made several discoveries helping to catalogue these genetic variations in African and admixed populations, and identifying variants that explain this disparity.

Discoveries like these have the potential to improve treatment for complex diseases, as well as to help identify and screen high-risk populations. But personalized medicine also aims higher, at understanding how and why genes cause disease – and why, sometimes, they don't. An April 2016 Nature paper (doi:10.1038/532150b) described the discovery, through analysis of over 500,000 genetic samples, of a small number of individuals who carry mutations that by all accounts should cause serious diseases such as cystic fibrosis, but who have no signs of these diseases. "That’s a great story, and it really underscores the power of building bigger and bigger databases," says Barnes. "You would never discover something like that with what we used to think of a 'big' data set, 1,000 or 2,000 samples. You need hundreds of thousands of samples, or millions."

Barnes believes CU's new Center for Personalized Medicine can help reach this ambitious goal. One part of her vision for the center is implementation of a standardized chip for biobanking, which allows bioinformatics researchers to merge data sets, amplifying their statistical power. Earlier this year, Barnes also led a proposal to the NIH's Precision Medicine Initiative, which aims to build a million-person biobank representing the country’s population. Barnes, working with units within and outside CU, created a proposed 'enrollment center' to help generate the ~600,000 samples in that million-person biobank that will be gathered from patients through health provider organizations (the remaining ~400,000 samples will be gathered from random volunteers across the country).

"What’s new about this initiative, and I think it's going to change medicine, is that the participants are long-term participants," says Barnes. "The proposal involved a level of community engagement we hadn't even thought about before, and it involved thinking about sophisticated data gathering, over time, which is a logistical problem going way beyond the typical focus on data analysis."

Barnes believes Colorado is a key location in the push to build a representative set of genetic data. "If you leave Colorado out, if you only focus on the coasts, which is where most of the centers who have this capacity are based, you leave out a large, important swathe of the American population," she says, citing Colorado's ethnic and racial diversity, urban and rural environments, and altitude differences as examples of opportunities to improve the diversity of a national biobank.

Despite high marks from the independent peer review panel, CU's NIH proposal was not ultimately funded; however, Barnes says she regarded the process as a valuable way to jump-start the collaborations the center will need to succeed.

"This is what people are talking about when they say 'Big Data!'"

How are the center and the division (both under Barnes' leadership) differentiated?

The Center for Personalized Medicine is a broad, institutional initiative, and Barnes says she hopes to partner with other organizations, including UCHealth affiliates, Denver Health, the VA, National Jewish, and other universities in the state. Meanwhile, the Division of Biomedical Informatics and Personalized Medicine was created within the CU Department of Medicine as an academic home for the center's faculty, although some center faculty are located in other departments in the School of Medicine, or in the School of Pharmacy and Colorado School of Public Health.

Since last November, Barnes has established a few key priorities.

"One of the pieces that was critical to help this program succeed, but hadn’t been in the original blueprint, was the computing – what are we going to do with all of the data we're generating?" CU's COMPASS health data warehouse is large and well-established, and Barnes says it was one of the reasons she came to CU. She also worked with architects and designers to create a state-of-the-art facility to allow highly efficient biobanking to create genetic data. But bringing together CU's large bank of health data with its rapidly growing genetic data set was a challenge that hadn’t yet been addressed.

So, with support from the School of Medicine and Department of Medicine, one of Barnes' first major projects has been building CU's Translational Informatics and Computational Resource (TICR). This is CU's biocomputing operational unit, involving both the computing capacity and storage needed to work with such large data sets ("This is what people are talking about when they say 'Big Data!'" says Barnes) and personnel with expertise in data analysis and computational biology.

Divisional recruitment is also a high priority for Barnes, who is aggressively recruiting faculty with expertise in population genetics, pharmacogenetics, genetic epidemiology and clinical genetics. Overall, Barnes hopes to grow the division to 10-15 faculty members (it currently has five, including Barnes).

In recent months, Barnes says her major focus has been on clinical operations. "UCHealth and Children's Hospital Colorado are massive, complex health care provider organizations, so simple questions like 'how do I identify a participant for the biobanking program' become logistically complicated," she says. Barnes is working with clinical units and the Community Campus Partnership to recruit volunteers for biobanking.

"The University of Colorado is really positioned to make a big impact," says Barnes. "Personalized medicine has been made such a priority across the campus, so while the center and the division have important roles to play as a home for this kind of activity, it's actually taking place at a much broader level, which is exactly the environment you need if you want to see major advances."