Within CellSight Program, our major research interest is in exploring the role of exosomes in Age-related macular degeneration and intercellular communication during retinal development.

Despite our growing understanding of dry AMD (Age-related macular degeneration), an effective treatment remains elusive. AMD is an eye disease that affects a part of the retina called macula which is responsible for our vision. A damaged macula will lead to central vision loss, significantly affecting the quality of life of the people affected by this disease and their families. By 2040, the estimated number of people living with macular degeneration is expected to increase to 288 million. Dry AMD begins with the appearance of small clumps of accumulated waste called drusen underneath the retinal pigment epithelium cells (RPE).

The RPE oversees the healthy status of the macula. The lack of therapies for dry AMD responds, to a certain extent, to our little understanding of the formation of drusen in RPE.

To overcome this problem, our lab seeks to understand how little vesicles, called exosomes, that are secreted by RPE cells and contain lots of cellular bioproducts are delivered from unhealthy RPE cells to neighboring cells and how this mechanism contributes to drusen formation and the progression of AMD. Our goal is to study how drusen are formed and how they cause AMD. To accomplish this, we are mimicking AMD disease using RPE cells derived from stem cells and, recapitulate AMD mechanisms including the formation of drusen.

Our system would provide a unique platform to understand the mechanisms that trigger AMD, advancing our understanding of the contribution of exosomes to drusen formation; the discovery of novel targets for the prevention and/or treatment of AMD; and the use of circulating exosomes as surrogate markers of early AMD disease to diagnose and, to successfully treat it.

Our laboratory is also aiming to understand and unveil novel aspects of the dialogue between the retina and RPE. We are focusing on the intercellular interaction between the Retinal Pigment Epithelium and the Photoreceptor cells by using stem cells and exosomes as tools. 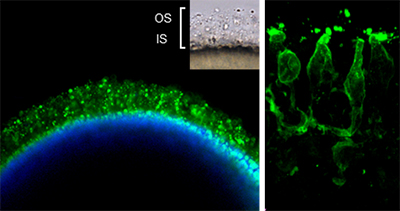 Human Retinal Organoids are properly laminated, with a dense patch of photoreceptors outer segments-like structures, and prominently labeled with antibodies against recoverin and rhodopsin 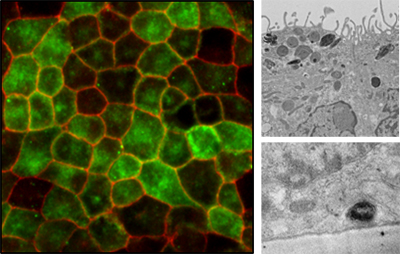 Human RPE secreted exosomes: characteristic clear rounded membrane vesicles in a size range of 50–200 nm. We aim to understand the dialogue between the retina and the RPE via Exosomes intercellular communication 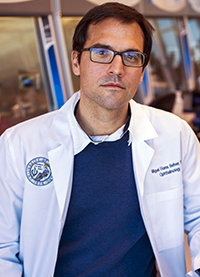