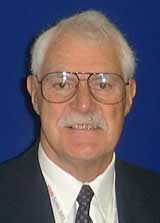 Robert B. Rutherford, MD, for whom our fellowship was named, was the face of Vascular Surgery at the University of Colorado School of Medicine and the CU Department of Surgery for almost three decades from 1970 to 1996. However, his association with CU started even earlier, with general surgery residency training at CU from 1957-1963, including a Fulbright Scholarship for training in Sweden in 1961-1962. Following an additional two years of research at Walter Reed, Dr. Rutherford then joined the Johns Hopkins surgical faculty in 1965. In 1970 he returned to CU as an Associate Professor.

During much of the latter half of his career, Dr. Rutherford worked diligently to bring uniform standards to the reporting of vascular practices in the professional literature, publishing a series of papers as chairman of the Committee on Reporting Standards of the Society of Vascular Surgery and the American Association for Vascular Surgery. Although he retired as Professor Emeritus in 1996, he did not retire from his prominent position as a voice for Vascular Surgery nationally and internationally. This work continued, as evident by Dr. Rutherford's editorial and committee work.

Dr. Rutherford co-edited the "Journal of Vascular Surgery" from 1996-2003. Dr. Rutherford co-chaired the Transatlantic Consensus on Peripheral Arterial Occlusive Disease (TASC) in 2005. That same year, he was the recipient of the first Lifetime Achievement Award given by the Society of Vascular Surgery. At the annual meeting of the SVS in 2006, he was awarded the second annual Julius H. Jacobson II, MD Award for Physician Excellence given by the Vascular Disease Foundation.

On November 22, 2013, at the age 82, Dr. Rutherford passed away at his home in Boerne, Texas, surrounded by his wife and several members of his immediate family.

At the University of Colorado, we are proud to name our Vascular Fellowship in honor of Robert Rutherford. We can only endeavor to make the program a testament to his scholarship and teaching and dedication to medicine and the field of Vascular Surgery.