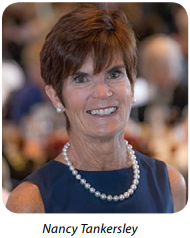 A former exercise physiologist, health is close to Nancy’s heart. And speaking of the heart, Nancy spent years working with patients in cardiac rehabilitation after they had experienced a heart attack. She noticed that most of her patients were men, despite the fact that more women have heart attacks. She also noticed that women were often misdiagnosed; they had had a heart event, but were told it was something else such as depression, anxiety, or side effects of menopause.

Nancy seized the opportunity to effect change in women’s health through her long-term support of the Ludeman Family Center for Women’s Health Research. On a group trip to the Eastern Bloc countries shortly after the Berlin Wall came down, she became good friends with Judi Wagner, a Denver businesswoman and community volunteer who is also a supporter of the Ludeman Center. Judi added her to the mailing list for the Ludeman Center and sent her an invitation to the first Ludeman Center Luncheon, held in the basement of the Tattered Cover Book Store in Cherry Creek. Eating lunch from a small box, Nancy listened to the Ludeman Center founder Judy Regensteiner talk about differences in diagnosis and treatment of women’s heart disease and diabetes. The Ludeman Center's mission sparked her interest, and she immediately knew that getting involved and supporting the Ludeman Center was a way to bridge her passions for women’s health and philanthropy.

As Nancy continues to support the Ludeman Center, her aspirations for its community impact grow. In ten years, she hopes to see the Ludeman Center fund more young scientists and broaden its scope to explore other important health issues for women. She also hopes to see the Ludeman Center's work reach a larger population of younger women who could benefit from its research findings. Nancy feels passionate about philanthropic giving, especially to grassroots organizations such as the Ludeman Center, whose programs and reach within the community have grown significantly since she became involved in 2004. Nancy recently announced that she has included the Ludeman Center in her estate planning. She knows this contribution will eventually leave a great impact on women’s health as her generosity will fund future researchers and events that strive to elevate everyone’s knowledge of women’s health issues.

Nancy encourages everyone to do two simple things to raise awareness about women’s health: ask your doctor about it and talk to your friends. As a former health care worker, Nancy knows that by engaging your doctor in the conversation, you will help them become aware of the importance of sex differences in research and treatment. By talking to your friends, you are spreading the word about topics that could one day improve their treatment for health issues and save their lives.

The Ludeman Center extends its deep appreciation to Nancy Tankersley for her long time support!