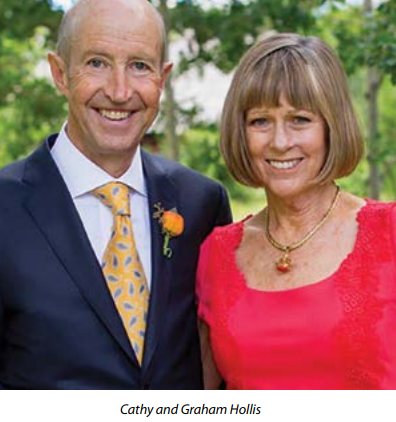 Twelve years ago, Cathy Hollis’ first introduction to the Ludeman Family  Center for Women’s Health Research was at the Annual Luncheon in the green carpeted basement of the Tattered Cover. During the program, she was particularly struck to learn about how understudied women were, especially in the area of cardiovascular disease, the number one killer of women. Cathy’s interest in the work of the Ludeman Center was piqued because her mother had been misdiagnosed during a cardiovascular event in which she did not exhibit the typical “male” signs of crushing chest pain and shortness of breath. After suddenly becoming disoriented and nauseous, Cathy took her mother to the ER of a Southeast Denver hospital, and the staff questioned why Cathy was so concerned.

A Denver native, Cathy attended CU-Boulder and served as an accountant for several companies and organizations. As an astute investor who closely follows biotech and medical innovation companies, Cathy has been a long time member of an investment club with past advisory board chair Catherine Petros. When Cathy attended a second Ludeman Center event with Catherine, she was taken aback at the growth of the Ludeman Center and was impressed by the great strides that had been made in supporting and mentoring young scientists. Catherine immediately noticed a connection stating, “Cathy is so smart and makes a study out of investing in biotech companies. I saw the Ludeman Center as a natural fit for her next leadership role in the community.” Cathy subsequently joined the Ludeman Center Advisory Board, and over the past three years, the Center for Women’s Health Research has greatly benefited from Cathy’s active engagement, leadership, and fundraising skills.

During her tenure on the Ludeman Center board, one of the most rewarding experiences for Cathy has been getting to know a Ludeman Center funded scientist, Emily Su, MD, of the Department of Obstetrics and Gynecology. “The sacrifices that Emily has made to pursue research are just amazing. She is truly passionate about her research on the placenta, and it is so refreshing to see and learn about her commitment to her work.” From her lens as an investor, Cathy emphasizes how ripe the investment opportunities are in women’s health and how traditionally underappreciated women’s health has been in the world of venture capital. In addition to her work in the community, Cathy enjoys biking and skiing with her husband Graham, gardening, and marveling at her two small grandchildren.

Cathy’s leadership and impactful philanthropy have played a critical role in the success of the Ludeman Family Center for Women’s Health Research.