It may not sound hardcore, but here's how 120 minutes of sweating can change your life. 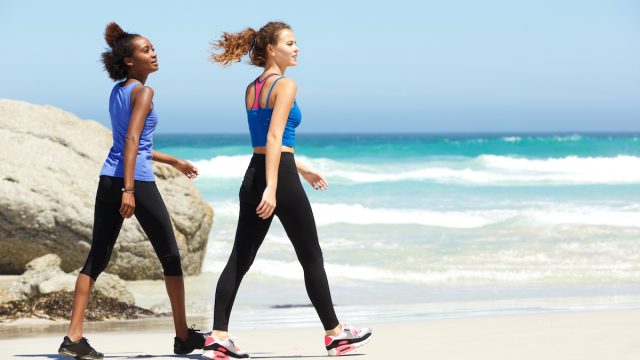 Original Publication (Eat This, Not That!)

Both the World Health Organization and American Heart Association recommend that adults perform at least 150 minutes per week (two and half hours) of moderate aerobic exercise, such as a brisk walk or light bike ride, or 75 minutes of vigorous aerobic exercise such as running or hiking. Importantly, both organizations also offer a third option: a combination of both moderate and vigorous activity roughly equivalent to either of the first two options. So, about two hours of combined moderate and vigorous exercise should be enough to meet those suggestions as well.

Now, those numbers represent the bare minimum recommended amount of exercise an adult should engage in on a weekly basis to promote overall well being and remain healthy. It's easy to assume that simply performing the bare minimum won't get you very far from a health perspective. After all, two hours of exercise spread out over the course of a full seven days hardly sounds insurmountable. In actuality, though, this amount of weekly activity can offer a long list of benefits.

"This amount has been shown to help reduce your risk of heart disease, high blood pressure, depression, stroke, type 2 diabetes, colon and breast cancer, and decreased cognitive function," Judith Regensteiner, Ph.D., director and a founder of the Center for Women's Health Research at the University of Colorado School of Medicine in Aurora, told Consumer Reports. Read on to learn more about the secret side effects of exercising for just two hours per week. And for great fitness advice, don't miss The Secret to Getting a Lean Body for Good, According to Science.


We're all well aware of just how devastating and deadly a cancer diagnosis can be, but there's scientific reason to believe that meeting recommended weekly activity levels can help lower the risk of developing numerous forms of cancer. This study, published in the Journal of Clinical Oncology, reports that exercising moderately for 150 minutes per week (or shorter if you ramp up the intensity) is linked to a statistically significant lower risk of developing seven cancer varieties: colon, breast, kidney, myeloma, endometrial, and non-Hodgkin lymphoma.

A total of seven prior relevant research projects were analyzed to reach these conclusions, encompassing over 750,000 people. It's also worth mentioning that cancer risk in reference to those seven types drops even further the more an individual exercises.

"Physical activity guidelines have largely been based on their impact on chronic diseases like cardiovascular disease and diabetes," notes Alpa Patel, Ph.D., senior scientific director of epidemiology research at the American Cancer Society. "These data provide strong support that these recommended levels are important to cancer prevention, as well." And for more life-changing exercise advice, see here for the Secret Exercise Tricks for Keeping Your Weight Down for Good.

2. You'll Sleep Like a Baby
Lack of sleep can seep into virtually every aspect of life. When we're not sleeping, we're unproductive, irritable, and in many cases, just plain miserable. No amount of movement can replace a good night's rest, but a fascinating study published in the British Journal of Sports Medicine reports that walking briskly for two and a half hours each week (or running for 75 minutes weekly) "eliminated most of the deleterious associations of poor sleep" among a group of participants routinely dealing with inadequate sleep.

Over 380,00 people were tracked for a period of 11 years. In comparison to those sleeping poorly and not exercising, those sleeping poorly yet exercising a few hours per week were less likely to develop heart disease, cancer, and die early. Sleep deprivation is linked to a long list of health issues, so this work suggests that even as little as a few hours of exercise weekly can greatly reduce the detrimental health impact of lack of sleep. Considering how common insomnia is right now, these findings feel particularly timely.

3. You'll Have a Longer Life


Finding some time for just 150 minutes of moderate intensity exercise each week can cut your risk of dying prematurely considerably. That's the noteworthy conclusion reached by extensive research published in The Lancet. Over 130,000 adults living in 17 different countries were tracked for an average follow-up period of seven years after filling out a survey on their usual activity/exercise levels.

Not only were individuals attaining at least two and a half hours of moderate exercise much healthier in general than their more sedentary counterparts, this group was also associated with a 28% lower risk of premature death. Again, when we talk about "moderate physical activity" that can mean a whole lot of stuff many people don't even define as "exercise."

"I would dispel the notion of having to put out money to be active," lead study author Dr. Scott Lear, a professor at Simon Fraser University's Faculty of Health Sciences in Canada, told Vox. "Our findings indicate that non recreational activity — work, housework, active transportation — is just as beneficial in reducing the risk for premature death and heart disease."

4. You'll Have a Better Brain
While it's safe to say that every organ in the human body is important, the brain may top the list. Our minds make decisions, and the rest of the body follows. As such, maintaining a healthy mind and strong cognition is absolutely essential to living one's best life and aging gracefully. It's no secret that exercise is good for the brain, but even just a few hours of exercise per week has been shown to produce major brain benefits.

One study encompassing over 2,000 older adults published in JAMA Network Open concludes that even among individuals who engage in less than the minimum recommended amount of weekly exercise, each hour spent performing light-intensity physical activity such as walking was associated with larger brain volume – equivalent to a brain age 1.1 years younger.

"Every additional hour of light intensity physical activity was associated with higher brain volumes, even among individuals not meeting current Physical Activity-Guidelines. These data are consistent with the notion that potential benefits of physical activity on brain aging may accrue at a lower, more achievable level of intensity or volume," explains Nicole Spartano, Ph.D, research assistant professor of medicine at Boston University School of Medicine (BUSM).

Moreover, additional research indicates that exercising for two to two and a half hours per week may help prevent or at least slow hereditary Alzheimer's and improve quality of life among Parkinson's patients.

5. Remember: Quality Can Trump Quantity
Popular American culture usually proclaims that more is better. When it comes to exercise, however, you may be surprised to learn that isn't always the case. Many fitness "experts" and influencers may tell their audiences to live in the gym 24/7, but excessive exercise can actually end up backfiring. This study published in The Lancet Psychiatry reports individuals exercising for more than six hours per week actually felt more stressed and depressed than others who kept their fitness routines to between two and six hours weekly. And for more fitness news you can use, read about the surprising Side Effect of Lifting Weights Just 2 Days Per Week.