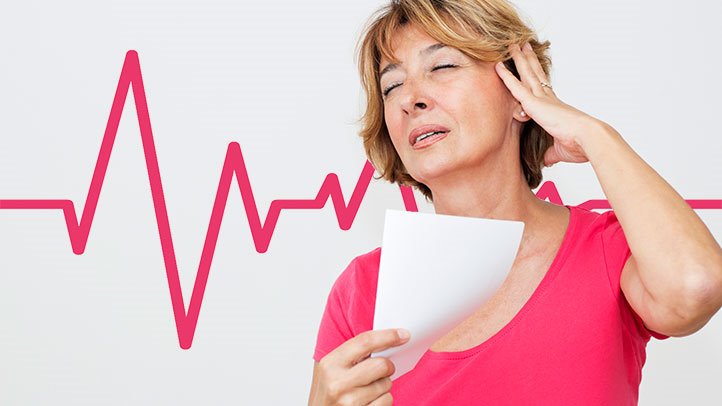 Hot flashes aren’t just a nuisance that can keep you up at night and make you sweat right through your clothes during the day. When you have too many hot flashes, you may have an increased risk of experiencing cardiovascular events like a heart attack or stroke, according to an unpublished study presented at the annual meeting of the North American Menopause Society, held September 25–28 in Chicago.

The study followed 3,302 women who hadn’t started menopause or were just beginning this transition for up to 20 years, starting when they were ages 42 to 52. Researchers surveyed women annually about so-called vasomotor symptoms like hot flashes and night sweats; each survey asked how often women had experienced vasomotor symptoms in the previous two-week period.

In addition, researchers asked women whether they had experienced any cardiovascular events, including: heart attack, stroke, heart failure, procedures to restore blood flow to the heart, or bypass surgery. They also checked medical records to verify any events.

During the study, 261 women, or 7.9 percent, had a cardiovascular event.

Compared with women who didn’t have any hot flashes or night sweats at all, those who had them at least 6 out of 14 days early in menopause were 62 percent more likely to have an event like a heart attack or stroke, the study found.

And women who reported having hot flashes and night sweats at least 6 out of 14 days in several annual surveys were twice as likely to have a cardiovascular event as women who didn’t have any vasomotor symptoms at all.

“We don’t always know which women at midlife will go on to have cardiovascular events later in life,” says Rebecca Thurston, PhD, the lead author of the study and the director of the women’s behavioral health program at the University of Pittsburgh Medical Center. But, she says, “frequent hot flashes provide an additional clue.”

Women go through menopause when they stop menstruating, usually in their forties or fifties. Reduced production of the hormones estrogen and progesterone in the years leading up to menopause and afterward can lead to a wide range of symptoms, including mood swings, joint pain, vaginal dryness, insomnia, memory problems, and hot flashes and night sweats.

While some previous studies have linked vasomotor symptoms to heart disease, these studies didn’t provide strong evidence because they relied on women to recall how often they had hot flashes years after the fact and because they assessed the risk of heart problems based on changes in the body that might lead to heart attacks — like damaged arteries — and not whether women actually had heart attacks, Thurston and colleagues note.

The current study is different, however, because it asked women about their symptoms while they were going through menopause, and experiences like hot flashes would be fresh in their minds, the study authors write.

And the current study linked frequent hot flashes and night sweats to an increased risk of cardiovascular events like a heart attack or stroke even after accounting for other things that can lead to heart problems, including smoking, inactivity, obesity, high blood pressure, elevated cholesterol, diabetes, poverty, and limited education.

This makes it crucial that women do what they can to adopt a heart-healthy lifestyle, Thurston says.

“Women with a lot of hot flashes or especially persistent hot flashes — frequent hot flashes that last for years — should stop smoking if they smoke, eat well, exercise, get their regular, recommended checkups, and take medications as prescribed,” Thurston advises.

One limitation of the study is that researchers didn’t look at how old women were when they went through menopause, says Susan Davis, MBBS, PhD, an endocrinologist, the director of the women’s health research program at Monash University in Australia, and president of the International Menopause Society.

“Women who had more flashes or night sweats may have been more likely to have an earlier menopause, which increases the risk of cardiovascular disease,” says Dr. Davis, who wasn’t involved in the study.

It’s possible that early menopause, rather than hot flashes, may be the culprit in women’s increased risk of events like heart attacks and strokes later on, Davis says.

More research is still needed to understand whether or how hot flashes may lead to heart problems, and in the meantime, women shouldn’t panic.

Women also shouldn’t wait for conclusive evidence of a connection between hot flashes and heart attacks to make any necessary lifestyle changes to help minimize their risk of cardiovascular disease, Davis says, adding, "[There's] no take-home message for patients at this stage. In fact, because this is observational, small, and, really, I dare say, inconclusive, I would not want to frighten women with this information."

“Cardiovascular disease is a leading cause of death in women,” Davis notes, so women should try to maintain a healthy weight, eat well, and manage their stress, blood pressure, and cholesterol levels to lower their odds of heart problems.