"One of the things that I'm most proud of is the fact that I'm now mentoring researchers who have been awarded the CWHR grants." 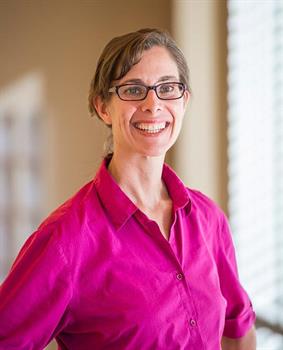 Dr. Nadeau is a Professor of Pediatrics and was the first recipient of the CWHR Faculty Development Award in 2006. Her research is primarily focused on adolescents with both type 1 and 2 diabetes.

How did you first get involved with the Center for Women's Health Research?

I applied to and received the Center for Women's Health Research first even pilot grant. I was interested in the CWHR in particular because my research is focused on adolescents with both type 1 and 2 diabetes. In pediatrics, there is a female predominance - type 2 diabetes is more common in girls than in bot. In addition, with type 1 diabetes, it looks like diabetes contributes to an increased risk of cardiovascular disease if you're a female. For both of those reasons,I was interested in looking at sex differences and trying to understand the reason why both of those observations happen with diabetes.

Today, I'm most proud that I'm now mentoring researchers who have been awarded the CWHR grants. I'm in a position to encourage young researchers to go into women's health and sex differences research.

As a woman of American Indian descent, I knew that I wanted to pursue a career that would have an impact on the community. Around the time that I was discovering my passion for research, we were starting to recognize the prevalence of type 2 diabetes in adolescence, which has disproportionately affected the American Indian community. Knowing also that there is a lack of research on sex differences with kids who have diabetes,I've been fortunate to combine my research interests and have the support of strong women mentors throughout my career.

Are there any interesting studies/findings that you've been working on lately?

During a recent study, we treated adolescents with type 1 diabetes with Metformin, a medicine that's usually used in type 2 diabetes. By incorporating some new techniques in MRI imaging, we were able to detect improvements in the aortic and cardiac health with the Metformin treatment. Previously we've seen that Metformin can help with obesity or lowering insulin dosing. This was very exciting because we could actually detect improvements in cardiovascular health and insulin sensitivity.

If there was one thing that you could communicate about the importance of your research, what would it be?

For kids, obesity is increasing and physical activity is decreasing. And it's creating a major rise in type 2 diabetes that appears to be really difficult to treat. It's important that we work on prevention to try and curb this. Kids need their own unique treatments, and with the heavy predominance of girls being affected, we need to study the sex differences so that we can understand why these girls are the ones who are really bearing that burden.