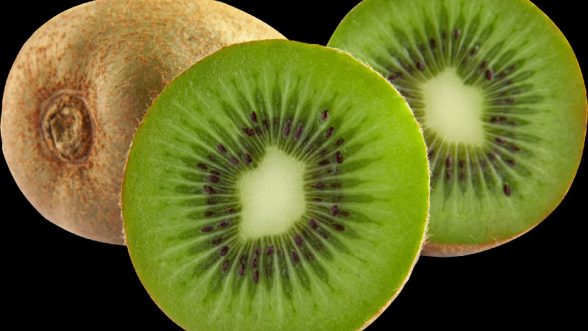 But new research from the University of Colorado Anschutz Medical Campus has discovered that a powerful antioxidant found in kiwi fruit, parsley, celery and papaya known as pyrroloquinoline quinone, or PQQ, can halt or prevent the progression of fatty liver disease in the offspring of mice fed a high-fat Western-style diet.

Karen Jonscher, PhD, associate professor of anesthesiology and a physicist at CU Anschutz.

Growing evidence suggests that childhood obesity and fatty liver disease is influenced by maternal diet and the infant’s microbiome, the community of microorganisms inhabiting the body.

Jonscher and her colleagues found that mother mice fed a Western-style diet passed on the negative impacts of that diet to their offspring.

Jonscher’s earlier work on PQQ showed it helped turn back these detrimental effects in newborn mice in milder forms of liver disease. In this study, she demonstrated that it also works on the early offspring microbiome to prevent the development of fatty liver disease.

Over the past decade, it has become clear that the developing infant gut microbiome affects maturation of the immune system and gastrointestinal tract, metabolism, and brain development.

“Increasingly, evidence suggests that exposure to maternal obesity creates an inflammatory environment in utero. This leads to long-lasting postnatal disruptions of the offspring’s innate immune system and gut bacterial health, which may increase the risk for development of fatty liver disease,” Jonscher said.

Obesity, which often stems from a high-fat, high-cholesterol, sugary diet, is a major cause of NAFLD. According to the Journal of the American Medical Association, nearly 60 percent of American women of childbearing age are overweight or obese. Numerous studies suggest their children tend to have increased liver fat and a higher risk of becoming obese.

“Fatty liver disease is the number one liver disease in the world,” Jonscher said. “It is now the leading cause of liver transplants, eclipsing hepatitis in many areas of the U.S.”

The researchers found that they could halt and prevent liver disease from developing in young mice by feeding their mothers PQQ.

“Our results highlight the importance of the neonatal period as a critical developmental window to protect obese offspring from the harmful effects of diet-induced lipotoxicity and potentially halt the devastating trend of increasing pediatric NAFLD associated with childhood obesity,” the study said.

Jonscher noted that more work is required to determine if these studies might apply to humans.

“But there is a possibility that people with fatty liver disease could potentially benefit,” she said. “The supplement is available online and in grocery stores but individuals should consult their doctors first before using it.”