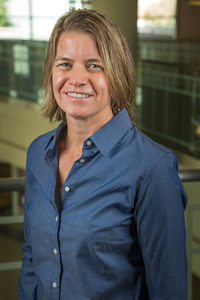 Dr. Moreau’s research focus on women started when she took over a cardiovascular aging study in women where there was an assumption that what was previously shown in the aging blood vessels in men would also be true in women. She performed a large scale study including premenopausal women and postmenopausal women who were already using hormone replacement therapy (HRT) and women who were not, women who exercised and women who did not exercise. They also studied the postmenopausal women who were taking HRT but not exercising before and after a 3 month moderate intensity walking program. Dr. Moreau and her colleagues found that postmenopausal women who were not exercising but who took HRT had healthier arteries than women who did not. Additionally, some of these women who participated in the 3 month walking program showed a huge benefit and were ultimately able to restore their vascular health to youthful levels. But because those women had been on HRT for an average of 10 years, it is possible that taking HRT at the onset of menopause helped their arteries to respond to exercise and return them to youthful levels. Dr. Moreau is looking at what is the critical window of intervening to protect artery health– when women are in transition or in the early post-menopausal period.

It is important to figure out why it is that women may not see the same level of exercise benefit as older men. It is possible that the loss of estrogen with menopause diminishes the ability of blood vessels to respond to exercise.  Thus, if researchers can find out how estrogen may regulate exercise responses, then the exercise adaptation should work better if Dr. Moreau’s theory is correct. Because women are living longer and a third of their life is after menopause, it is important to understand the aging process on blood vessels so that women can maintain quality of life to prevent the development of chronic diseases such as cardiovascular disease.

Dr. Moreau is conducting similar studies in men, specifically looking at whether having low testosterone speeds up the aging process of blood vessels and diminishes beneficial responses to exercise.