Pyloric stenosis, or narrowing of the outlet of the stomach, is a common cause of vomiting in early infancy. The vomit consists of undigested formula or breast milk and is caused by enlargement of the muscle that controls the flow of food from the stomach into the first part of the small bowel.

How this condition is diagnosed

Infants who develop pyloric stenosis appear well during the first one or two weeks of life. Regurgitation or small spit-ups of formula or breast milk usually begins during the third to fifth week of life. These small spit-ups are followed by more frequent episodes of vomiting, often prompting one or more visits to the pediatrician and formula changes. As the vomiting progresses over the next few days, it becomes more forceful and eventually projectile. The infant, however, remains hungry after vomiting and otherwise appears well. If nothing is done, the infant will become dehydrated and lethargic.

The physical exam is often notable for a dry mouth and absence of tears when the infant cries. The diagnosis is usually made by ultrasound. When ultrasonography is not available or if the pylorus is obscured by gas in the overlying bowel, an upper gastrointestinal (UGI) study should be performed. Positive findings on an UGI study include a narrow, elongated pyloric channel (string sign) and indentation of the stomach by the enlarged pyloric muscle.

Infants with pyloric stenosis can develop abnormal electrolyte levels in their bloodstream and/or significant dehydration. Severely dehydrated infants should be given intravenous fluids until their electrolyte disturbances have been sufficiently corrected to undergo an operation. 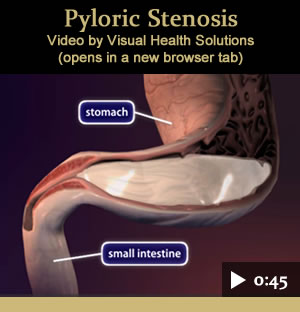 The standard operation for pyloric stenosis is division (cutting) of the enlarged pyloric muscle (called a pyloromyotomy). The operation is performed laparoscopically, or through a right upper-quadrant abdominal incision.

Most infants are discharged home 24 to 48 hours after surgery.