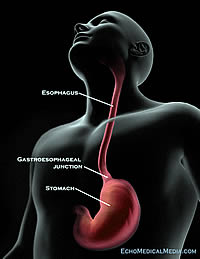 The most common type of esophageal tumor occurs in the lower part of the esophagus and frequently arises in the setting of chronic gastroesophageal reflux. Depending on the stage of the tumor, some cancers are treated with a combination of chemotherapy and radiation therapy either before or after the esophageal cancer operation. Meet our multidisciplinary esophageal cancer team.

The goal of the operation is to remove the tumor with an adequate margin, along with any surrounding lymph nodes that may contain microscopic tumors in them. The esophagus is then replaced with another portion of the intestine (usually the stomach) to re-establish intestinal continuity and permit regular food intake.

The Department of Surgery has several specially trained cancer surgeons who work together to perform these operations in a safe, thorough, and minimally invasive manner whenever possible. A minimally invasive esophagectomy generally involves smaller incisions on the abdomen, chest or neck through which the surgeons insert small videoscopes and instruments to conduct the operation. Esophageal continuity is re-established using these same minimally invasive techniques.

The advantages of this operation include:

The standard esophageal cancer operations have the same goals as the minimally invasive approach. Common types of operations include:

In some situations, the stomach may not be the best option to reconstruct the esophagus. In these cases, a portion of the small or large intestine may be used in its place. A temporary feeding tube may be placed at the same time, providing additional nutrition to enhance recovery.

Other esophageal conditions that may benefit from an operation include:

Surgeons in the Department of Surgery use a variety of minimally invasive techniques such as a laparoscopic Heller myotomy (for achalsia), laparoscopic Nissen fundoplication (for symptomatic reflux) and laparoscopic hiatal hernia repair.