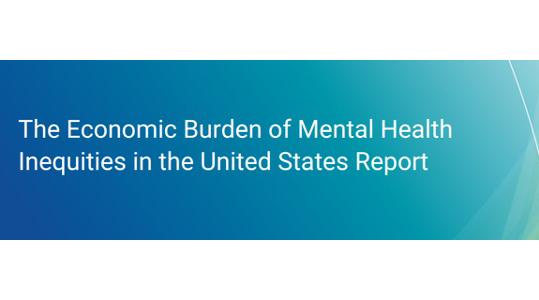 Mental health is critical to wellbeing, but not all Americans have equal access to behavioral health services, such as therapy, medication, and residential treatment. This report examines the impact of mental health inequities on American society by quantifying the potential economic and health savings that an equitable system would provide.

Researchers conducted a comprehensive literature review, analysis of public data sets, and analysis of state and national policies to demonstrate the relationship between economic status, mental health status, and racial and ethnic status. During the five-year study period between 2016 and 2020, they found:

These figures represent national estimates, but they underrepresent the actual burden of mental and behavioral health conditions. Traditional sampling frames and national surveys used for the estimates exclude important groups, including those who live in prison or jail, nursing home residents, residents of assisted living facilities, the unhoused, active military, and people who are institutionalized in psychiatric facilities. Because such populations are rendered invisible in available research, 5.8 million people cannot be taken into account. Analysis of this excluded group reveals nearly $90 billion in additional costs.

This report provides policy proposals, from the very large-scale investments needed, to smaller-scale ideas that can be immediately implemented to address the current and future needs. These include:

To learn more, read the press release and the full report.