The Surgical Critical Care & Trauma and Acute Care Surgery Fellowship is committed to a comprehensive and integrated experience in trauma, emergency general surgery (in the broadest sense), and surgical critical care. The fellowship is devoted to patient care, with clinical, research, and didactic components. The clinical component includes experience gained by direct patient responsibility under supervision of teaching faculty and independent study on relevant topics. Research may be conducted on a wide variety of critical care projects, and the opportunity to take master’s level classes at the University of Colorado School of Medicine in biostatistics and research methods exists. The didactic component involves taking part in multidisciplinary rounds, teaching rounds, and conferences. Through this educational experience at one of the country’s premier Level-I trauma centers and safety net institutions, as well as a University hospital and affiliated community hospitals, our program provides fellows with the training to become academic leaders in this emerging discipline.

The Surgical Critical Care (SCC) Fellowship at the University of Colorado/Denver Health Medical Center (UCH/DHMC) is the first year of a two-year Surgical Critical Care & Trauma and Acute Care Surgery Fellowship program. It is an ACGME/RRC approved training program, whose goal is to educate fellows in the advanced care of critically ill and injured patients.  The educational program is designed to provide the SCC Fellow with an education in the principles and practice of state-of-the art surgical critical care by exposing them to a broad array of surgical illnesses; this is accomplished through teaching rounds, primary patient care, educational conferences, and specialized rotations. Didactic components of the program include:

By the completion of training, the SCC Fellow is expected to demonstrate proficiency in surgical critical care decision making, specific organ system support, evaluation of new technology and treatment techniques, ICU administration, outcomes assessment, research design, and interaction with patients, families, and health care personnel. These clinical goals will be accomplished by providing the fellow with a position dedicated to the intensive care units at UCH/DHMC.

The broad experience gained through a diverse faculty and programmatic elements prepares the Fellow for their board examinations as well as a career in either academic or private practice.

The Trauma and Acute Care Surgery (TACS) Fellowship at the University of Colorado/Denver Health Medical Center (UCH/DHMC) is the second year of a two-year Surgical Critical Care & Trauma and Acute Care Surgery Fellowship. UCH/DHMC was approved as an official training site by the American Association for the Surgery of Trauma (AAST) in May 2008. The TACS fellowship curriculum builds upon the concepts and skills obtained during a five-year General Surgery Residency and on the surgical critical care skills learned in the first year of the fellowship.

During the second year of the fellowship, the TACS Fellow acquires a comprehensive knowledge of critical care, trauma, emergency general surgery, advanced operative skills, and procedural techniques in thoracic and vascular surgery. Under the supervision of attending faculty members, the TACS Fellow will be the physician responsible for patient evaluation, care, and intervention of all acutely ill surgical patients. TACS Fellows complete the following rotations:

In these rotations, the TACS fellow acquires advanced operative skills and procedural techniques. Recent graduates have performed over 100 thoracic cases, 75-100 vascular cases, over 200 ICU procedures, and over 500 elective, urgent, and trauma cases.

The TACS Fellow takes call once a week under the supervision of the TACS attending surgeon. Call at Denver Health Medical Center embodies this paradigm of training, as the Fellow evaluates and operates on patients with trauma as well as thoracic, vascular, abdominal, neurologic, and orthopaedic emergencies.

TACS training at the UCH/DHMC is the finest paradigm of training which incorporates Level 1 trauma center care, comprehensive surgical critical care training, and an expanded hands-on training in complex vascular, thoracic, and GI surgery in a setting where the faculty and institution are fully committed to an Acute Care Surgery model of practice. 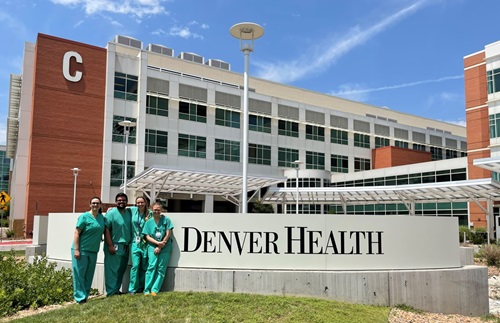 The Surgical Critical Care & Trauma and Acute Care Surgery Fellowship is a two-year program. All applicants for the fellowship should be interested in completing the full two-year training program.

Applicants must successfully complete General Surgery training in one of the following:

Applicants must also be American Board of Surgery certified or eligible to apply for our fellowship program through SAFAS.

Two Surgical Critical Care fellows are chosen yearly in the match sponsored by the National Resident Matching Program (NRMP). All applicants must register with the NRMP match to be considered. After successful completion of the first year of the fellowship, fellows matriculate to Trauma and Acute Care Surgery in their second year.

Applications and all supporting materials should be entered on the SCC and ACS Fellowship Application Service (SAFAS). For questions, refer to the SAFAS applicant instructions.

The following are required for applications: 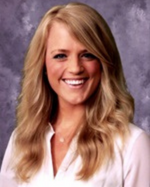 Dr. Chelsea Horwood was born and raised in Cleveland, Ohio. She is the middle daughter of an Orthopaedic surgeon and a surgical nurse. Her love of the operating room started at a very early age while rounding with her father in the hospital and seeing his post-operative patients. From an early age she wanted to pursue a career in surgery and attended college at Saint Louis University, MO. There she obtained a bachelor’s degree, majoring in Biology with a minor in Philosophy. She continued her medical education in Saint Louis, obtaining her medical degree from Saint Louis University. She graduated with multiple accolades including the Outstanding Student in Surgery Award. It was while in Saint Louis she fostered her love of live music and all things food and wine.

Dr. Horwood returned to Ohio for her General Surgery Residency training at The Ohio State University. While in Columbus, she participated in a research year focusing on Human Factors and structural changes for patient safety in the hospital setting, and acute care surgery outcomes in cancer patients. She also obtained a Masters of Public Health in Clinical and Translational Sciences with her thesis focusing on combining data visualization with current alarm technology to improve early detection in patient decompensation. She served on multiple committees focusing on patient safety, including Chair of the Clinical Housestaff safety committee, and obtained multiple awards, including resident of the year.

Outside of the OR, Dr. Horwood enjoys cooking and hosting dinner parties with her new husband, who is an amateur sommelier. She has recently mastered pasta dough and is on a lifelong quest for the perfect Bolognese sauce! In addition to cooking, she loves to travel, visiting multiple countries throughout the world, and actively seeks out live music. Dr. Horwood and her new husband are also excited to welcome a puppy to the family this summer. 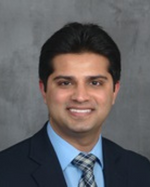 Dr. Husayn Ladhani was born and raised in Karachi, Pakistan and immigrated to the United States with his family in 2004. After completing high school in Carrollton, TX, he attended the University of Texas in Austin, TX, where he majored in Biochemistry and also obtained a Business Foundations Certification from the McCombs School of Business. From there, he attended medical school at the University of Texas Medical Branch in Galveston, TX. Initially planning to pursue a primary care specialty, Dr. Ladhani enjoyed his time on the surgical services and decided to change course to general surgery.

His pursuit of a rigorous, well-rounded general surgical training program took him to University Hospitals/Case Western Reserve University in Cleveland, OH, where he developed a strong interest in Trauma, Acute Care Surgery, and Burn Surgery while rotating at Metro Health Medical Center, the oldest level I trauma and burn center in Northeast Ohio. During residency, he was given the opportunity to spend time as the Richard B. Fratianne Research Fellow in the Division of Trauma, Critical Care, Burn, and Acute Care Surgery at Metro Health Medical Center. With no prior experience in clinical outcomes research, Dr. Ladhani thoroughly enjoyed his time as the research fellow and was very productive with numerous publications and national presentations to his name.

After completion of general surgical training, Dr. Ladhani will be joining the University of Colorado/Denver Health Department of Surgery as a Trauma and Acute Care Surgery Fellow. He is very humbled for this opportunity to work alongside and learn from the leaders in the field of trauma and acute care surgery. Outside of work, Dr. Ladhani enjoys travelling, hiking, and sports. He has enjoyed exploring Northeast Ohio during residency and is excited to call Colorado home for the next two years. 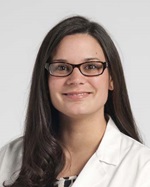 Dr. Kaitlin Ritter was born and raised in rural New Jersey where she grew up hiking, camping, and kayaking with her parents and younger sister. She then attended a small liberal arts school, Muhlenberg College, located in Allentown, PA. While there, she pursued a variety of interests including technical stage theater, literature, and basic science research, eventually graduating magna cum laude with a dual degree in biology and English literature and having completed a senior thesis on olfactory navigation signaling in bumblebees. From there, Dr. Ritter attended medical school at Drexel University College of Medicine in Philadelphia, PA during which she developed a love of baking and an unhealthy obsession with sprinkles.

Dr. Ritter then continued her westward travels for her General Surgery residency at the Cleveland Clinic in Cleveland, OH. There, she completed a split research year focusing on trauma outcomes and surgical education. It was here that she realized her love of teaching. She went on to chair her institution’s Education Committee and Surgical Simulation Committee and became involved in the RAS-ACS Education Committee on which she currently serves as Vice-Chair.

Outside of work, Dr. Ritter enjoys hiking and running (largely to offset the side effects of her love of baking). She has traveled extensively in the United States on various hiking expeditions and once became stranded on a remote Alaskan island requiring rescue by the coast guard. In addition to an exorbitant sprinkle collection, Dr. Ritter also collects coffee mugs from each of her cities of travel. 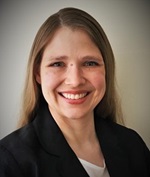 Dr. Morgan Sellers was born in Santa Fe, NM and grew up in Carmel, CA. In search of a big city, she left California and headed to New York for college, where she majored in cultural anthropology at Columbia University and spent most of her time writing for and editing the college daily newspaper.

Initially interested in public and international health, she completed the post-baccalaureate pre-medical program at Johns Hopkins University and spent a year in the post-bac/IRTA program at the NIH working in a malaria lab. Dr. Sellers attended medical school at the University of Pennsylvania and spent her preclinical years focusing on primary care and immigrant health, coordinating a free Spanish-language clinic and organizing a service trip to Guatemala. She fell in love with surgery during her clinical rotations and started a series of projects examining the intersection between quality improvement and surgical training that she continued during a research year at the American College of Surgeons. She returned to New York City for General Surgery Residency at the Mount Sinai Hospital, where she served as Education Chief Resident and was elected to Alpha Omega Alpha. She also completed a research fellowship at the Center for Surgery and Health Economics at the University of Pennsylvania during which time she obtained a master’s in Health Policy Research.

Outside of the hospital, she spends most of her time with her two sons and is thrilled to introduce them to the mountains and the West. Her husband is an emergency medicine physician who shares her love of travel, adventure, and parenting.