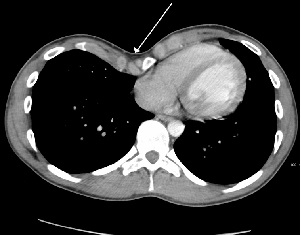 Pectus Excavatum is a deformity of the sternum where the breast bone is sunken into the chest. This results in the chest bowing inward and leaving the appearance of a depression in the chest. This condition can be noticed at birth but generally worsens during adolescence. This condition is more common in boys than girls, may be familial, and, depending on its severity, can interfere with the function of the heart and lungs.​ Surgery can correct the deformity and the use of the minimally invasive Nuss bar procedure can be used.

Pectus Carinatum is the opposite of pectus excavatum where the sternum is forced forward. This protrusion is caused by the formation of cartilage around the sternum. This deformity can be evident at birth and gradually worsens as the child develops. It can cause significant discomfort.

More information about the treatment of pectus excavatum, pectus carinatum and pectus arcuatum can be found by visiting the Multidisciplinary Chest Wall Disease Management Clinic.

Our surgeons who treat this condition


This information is provided by the Department of Surgery at the University of Colorado School of Medicine. It is not intended to replace the medical advice of your doctor or healthcare provider. Please consult your healthcare provider for advice about a specific medical condition.