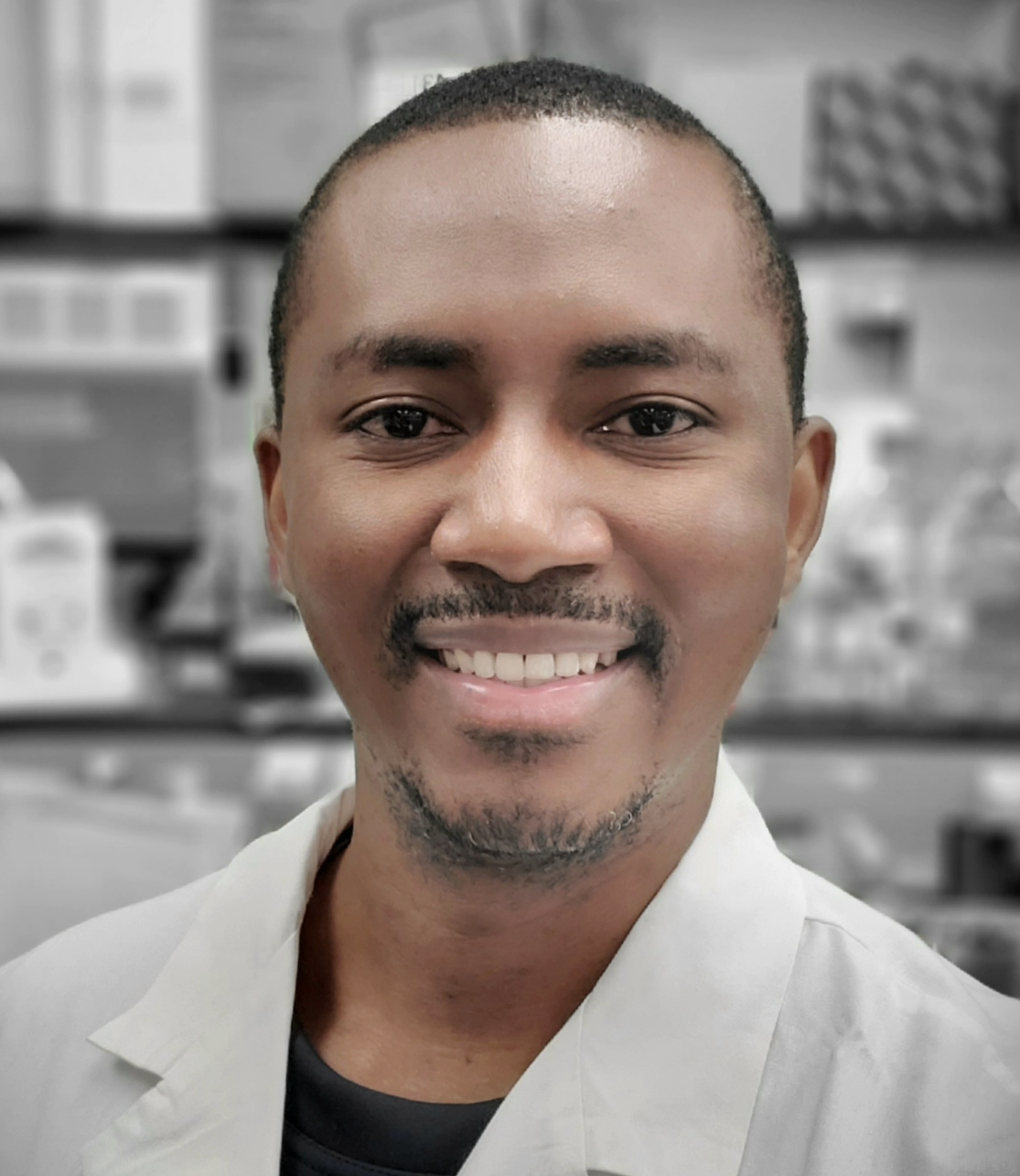 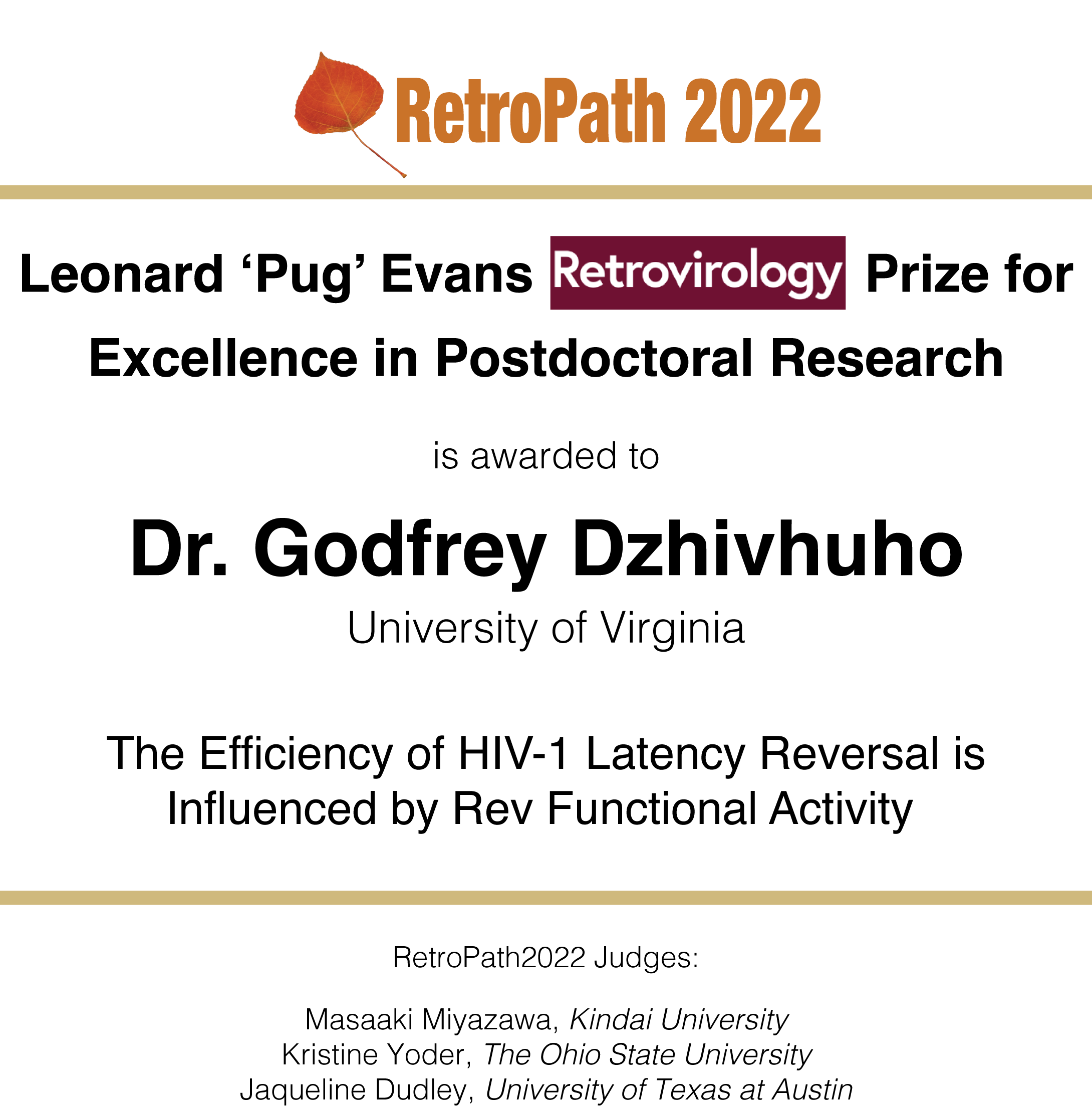 Dr. Dzhivhuho received his BSc (Hons) in Biological Sciences (2011) and an MSc in Zoology (Human Genetics) (2013) at the University of Venda (UNIVEN) in South Africa. There, he was first introduced to molecular biology in a hands-on summer workshop jointly taught by faculty from the University of Virginia and UNIVEN. In 2013, he participated in a Summer Research Internship Program at the University of Virginia (UVA) Medical School, studying molecular variation in genes involved in ischemic stroke. He then went on to complete a PhD in Medical Virology at the University of Cape Town. Dr. Dzhivhuho's project dealt with the impact of helminth infections on the immunogenicity of candidate HIV vaccines in a mouse model. After completing his doctoral research in 2017, he joined the Hammarskjold and Rekosh lab in the Thaler Center for AIDS and Human Retrovirus Research at UVA as a postdoc. His research focuses on HIV-1 virology with an emphasis on the establishment and reactivation of latency. Dr. Dzhivhuho also participates in other research projects in the Ham-Rek lab, including CRISPR-Cas9 library screening, HERV-K biology and SARS CoV2- N and S protein biology.

When I was in still high school, before the acceptability and availability of ARVs in South Africa, I suffered a loss of a family member to AIDS. AIDS was an absolute death sentence in our country at the time. I didn’t understand why HIV/AIDS was not curable. To do something, I got involved in youth awareness programs focusing on HIV/AIDS prevention and went on to study biological sciences at university. My fascination with retrovirus biology began when I learned about their ability to become part of the host cells’ DNA and how they rely on the host cell machinery for their replication. I realized that one could learn a lot about the biology of a cell from studying retroviruses such as HIV-1.

What do you like to do when you're not in the lab doing research?

I love working out in the gym, and given the chance, I engage in adrenalin-inducing activities. When I'm indoors, I love spending time with family and friends. I also enjoy playing the piano, video games and watching documentary shows, especially those about AI tech and deep space exploration. As an extramural activity, I give core lectures at a program called ACCESS Habitable Planet (HPW). This program uses an innovative curriculum that employs a unique mix of lectures, field trips, workshop sessions and interactive games to bring science alive. The main purpose is to introduce final-year undergraduate and honours students to the concept of Earth Systems Science from a unique Southern African perspective. 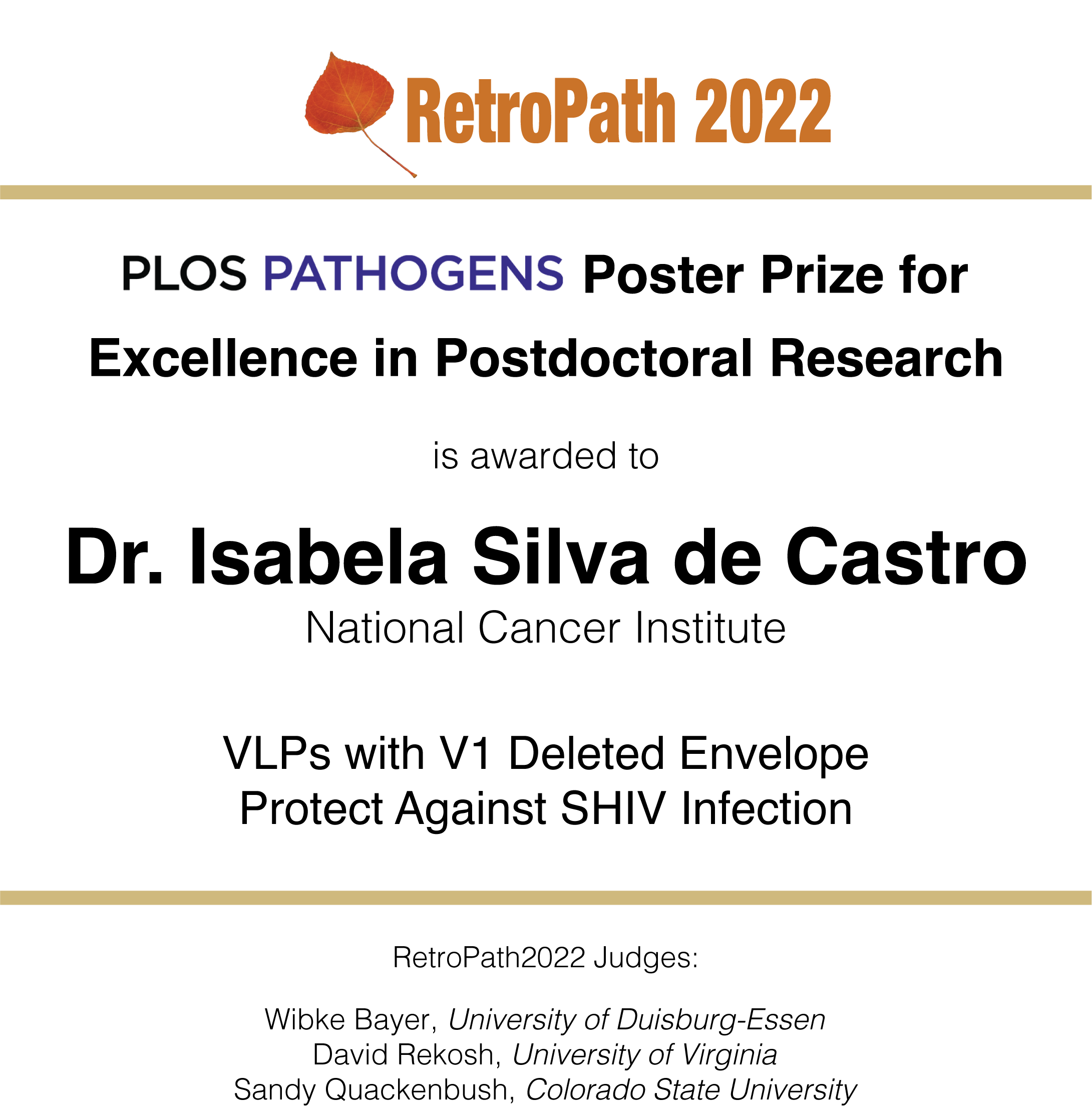 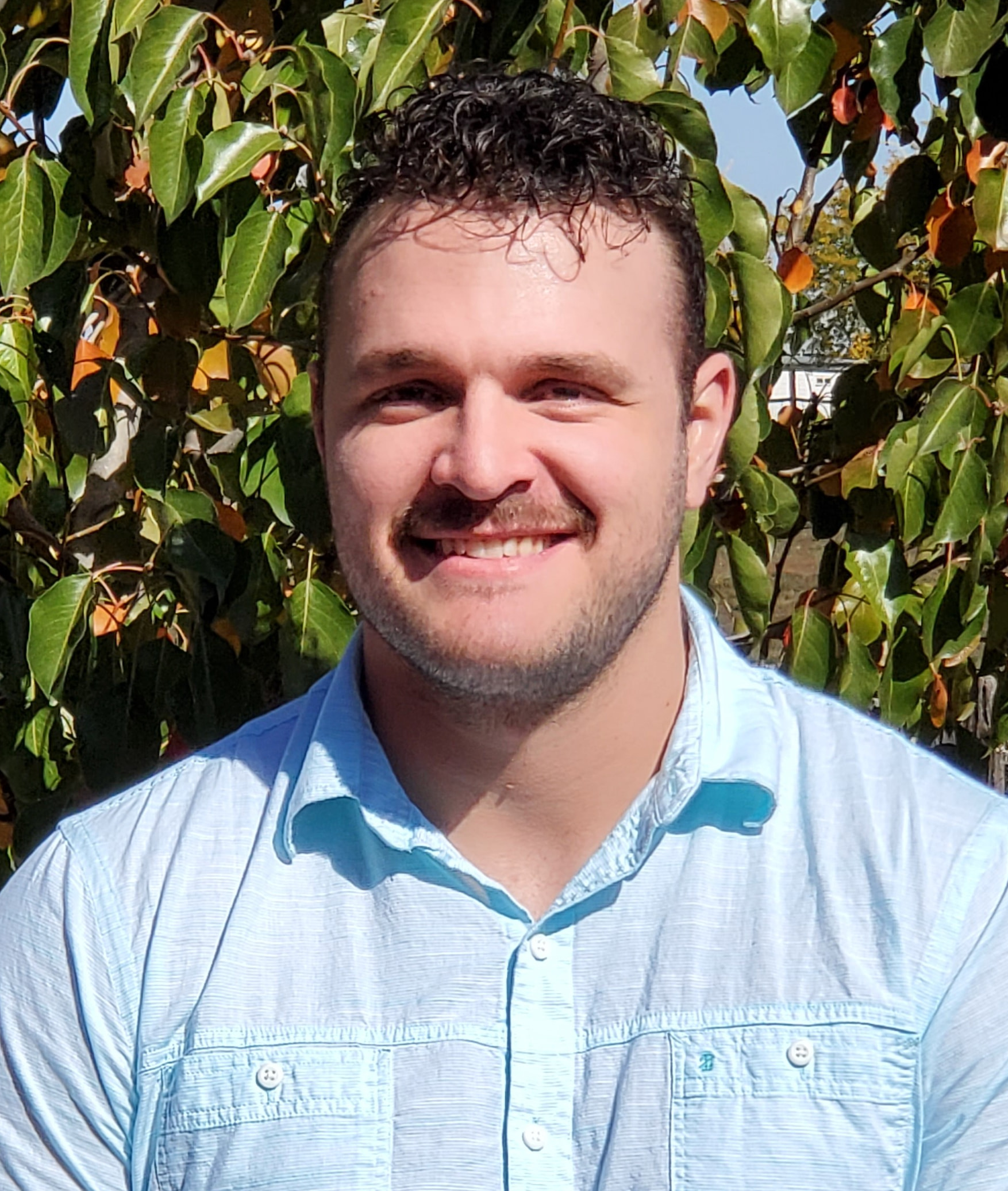 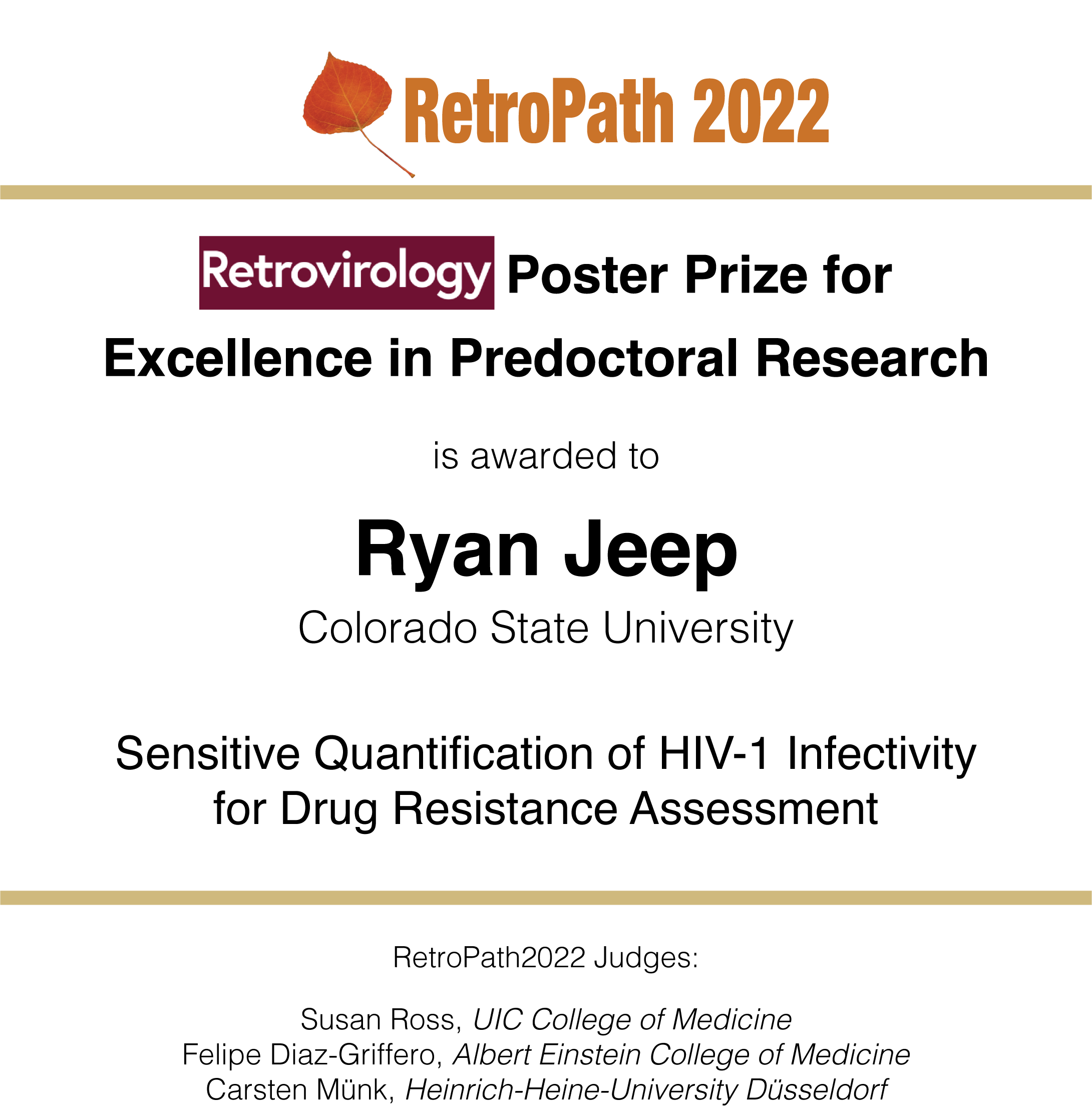 Ryan Jeep is a fourth-year Ph.D. candidate in Dr. Chaoping Chen’s lab in the department of Biochemistry and Molecular Biology at Colorado State University. He grew up in the mountains of Colorado before moving to California to pursue college basketball. Basketball eventually led him to Clarke University in Dubuque, IA, where he graduated with a B.S. in Biochemistry.

My first laboratory rotation of graduate school at CSU was with Dr. Chaoping Chen, where I became extremely interested in the mystery and complexity of HIV. I found myself fascinated by the autoprocessing pathway, wherein virus particles must undergo a large transformation to gain infective potential and propagate the viral lifecycle. Through my graduate training, I’ve gained extensive knowledge and experience centered around lentiviral design and generation, cell transduction, and cell culture.

What do you like to do when you're not in the lab doing research?

Outside of the lab, I love weightlifting, playing basketball, and watching movies. I’ll also never say no to anything competitive!