When a patient is diagnosed with thyroid cancer, it is important to consider the possibility that that the cancer may have spread to lymph nodes in the neck. However, physical symptoms experienced by the patient provide only limited guidance in determining whether this has occurred.

When cancerous lymph nodes are palpable, they are usually felt as painless, firm lumps at the side of the neck. When symptoms do occur, it is usually due to the enlarged lymph node pressing on surrounding structures such as the esophagus (swallowing difficulty), the windpipe (trouble breathing), or nerves (pain or hoarseness).

Because of the difficulty in determining whether the cancer has spread from symptoms alone, diagnostic tests are usually performed. 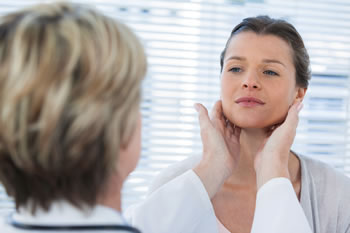