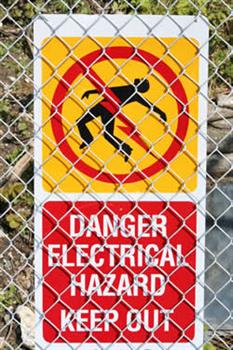 Electrical injuries cause an estimated 1,000 deaths per year and account for 5% of all burn-unit admissions. There is a bimodal age distribution of electrical injuries with young children and adults being the most affected.

Electrical injuries are notorious for being more severe, and affecting more organ systems, than would be expected from a cursory physical exam. An electrical injury that has burned only a small part of one’s skin can still cause tremendous permanent muscle and nerve damage. Once the current has entered through the skin, it races along nerve, muscle and blood tissues, damaging all of them. It can also cause immediate death by inducing cardiac arrhythmias or diaphragmatic paralysis. In addition, there can be delayed long-term effects such as formation of cataracts, cognitive dysfunction with impairment of short-term memory and emotional lability, and delayed onset of muscle weakness and nerve dysfunction. In short, an electrical injury can hurt you right away, weeks or months later, and then even years later.

When we admit an electrical injury to the burn unit, we often obtain a cardiology, an ophthalmology, a neurology, and a psychiatric or psychological consult to obtain baseline exams so that future changes can be detected and documented. We also evaluate for deep-tissue damage and the immediate need for surgery to save affected limbs.  If the affected limbs cannot be salvaged, we obtain plastic surgery to help with the reconstruction.

There are two types electrical current, both of which can cause severe injuries: direct current, such as battery shocks and lightning strikes, and alternating current, such as power lines and household current. 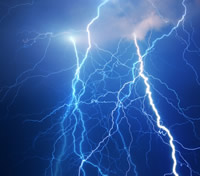 Shocks from high-voltage batteries, such as car batteries, boat batteries, and large industrial batteries, can cause serious injuries and even death. Fortunately, the time of exposure is usually brief since direct current often throws the victim away from the source with a large, single muscular contraction. (Alternating current, in contrast, is characterized by a cyclical flow of electrons that can cause tetanic muscle contraction in the hands, making the victim involuntarily grasp the source of the current and prolong his/her exposure to the electricity.)

Alternating-current injuries are divided into two classes: low voltage, <1,000 volts, and high voltage, >1,000 volts.  Regardless of the voltage, any physician treating an electrical injury should consult a burn unit for definitive care.  The low-voltage injury consultation could involve observation on telemetry, but most high-voltage injuries will need a transfer to the burn unit.  Alternating-current incidents can also cause traumatic injuries, necessitating a trauma workup.

Aside from the above injuries, we often see severe trauma and tissue injuries from arc burns, which are thermal burns caused by being near an electric arc.  Often the source of the electrical arc is a circuit panel, and the temperature of the arc can be the same as the temperature of the surface of the sun.  A patient can be thrown several feet and suffer third-degree burns even if the electrical current does not pass directly through them.  Occasionally, their clothes will catch on fire. Victims of arc burns often need extensive treatment.