Gsg1, Trnp1, and Tmem215 Mark Subpopulations of Bipolar Interneurons in the Mouse Retina 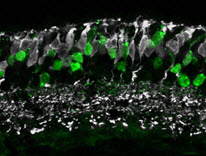 How retinal bipolar cell interneurons are specified and assigned to specialized subtypes is only partially understood. In part, this is due to a lack of early pan- and subtype-specific bipolar cell markers. To discover these factors, we identified genes that were upregulated in Blimp1 (Prdm1) mutant retinas, which exhibit precocious bipolar cell development.

RESULTS:
A comparison between Blimp1 CKO and control RNA-seq datasets revealed approximately 40 significantly upregulated genes. We characterized the expression of three genes that have no known function in the retina, Gsg1 (germ cell associated gene), Trnp1 (TMF-regulated nuclear protein), and Tmem215 (a predicted transmembrane protein). Germ cell associated gene appeared restricted to a small subset of cone bipolars while Trnp1 was seen in all ON type bipolar cells. Using Tmem215-LacZ heterozygous knock-in mice, we observed that β-galactosidase expression started early in bipolar cell development. In adults, Tmem215 was expressed by a subset of ON and OFF cone bipolar cells.

CONCLUSIONS:
We have identified Gsg1, Tmem215, and Trnp1 as novel bipolar subtype-specific genes. The spatial and temporal pattern of their expression is consistent with a role in controlling bipolar subtype fate choice, differentiation, or physiology.