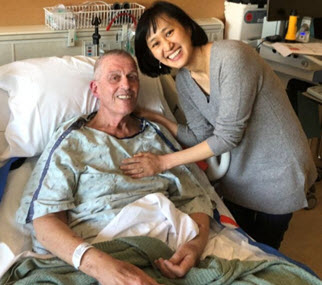 Bill Brennan sits at a patio table at the Wind Crest retirement development in Highlands Ranch. It is appropriately breezy. A walking stick he doesn’t particularly need leans against his chair. He greets pretty much all who pass by name: “Hi Andy. Hi Jill.” He just remembers names, and so people remember his, ever expanding his circle of friends. It’s a gift, he says.

He was born with that gift. Not long ago, he received another one at UCHealth University of Colorado Hospital on the Anschutz Medical Campus. It has released him from the grip of terminal cancer.

Brennan, 81, was, as of April 30, dying of a blood cancer called B-cell non-Hodgkin lymphoma. He had gone through two courses of chemotherapy; they had failed. Now a tumor the size of a ping-pong ball swelled under the skin near his right ear, another smaller one grew by his left ear, and many larger masses lurked his torso. His neck was badly swollen. The cancer was running rampant. Then on May 1, he received two injections.

Those injections contained his own cells – sort of. Four weeks earlier, under the supervision of UCHealth blood cancer specialist Dr. Enkhtsetseg Purev, Brennan had watched an apheresis machine suck blood from one arm, separate out white blood cells, and feed the rest back into his other arm. Purev sent the cells to Juno Therapeutics, which was sponsoring a clinical trial of an immunotherapy for B-cell non-Hodgkin lymphoma patients who had failed two rounds of chemotherapy: patients like Brennan.