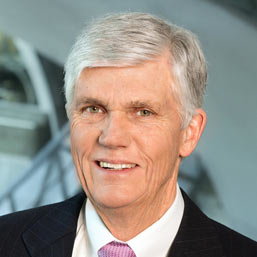 Wayne has been active in community service and has chaired the boards of the Denver Museum of Nature and Science, the Colorado Council for Economic Education, and the Colorado Outward Bound School. He also has served as a board member of the Boulder Community Hospital, the Metro Denver Chamber of Commerce, and the Samaritan Institute, and he served a four-year term on the city council for the City of Boulder. He is currently a member of the Colorado Forum, a trustee of the Denver Museum of Nature and Science and ALPS Series Trust (Mutual Funds), a director of Children’s Colorado Hospital, a director of AMG National Trust Bank, board member of Cherry Hills Country Club and is an elder in the Presbyterian Church.

An avid climber, Wayne is a member of the Colorado Mountain Club and the American Alpine Club. He has scaled all 54 Fourteeners in Colorado and numerous other peaks around the world, including Mt. Kilimanjaro in Africa and Mt. Elbrus in Russia. He and his wife Joyce, also a CU-Boulder graduate, have been married for 47 years and have two grown sons, both CU-Boulder graduates.