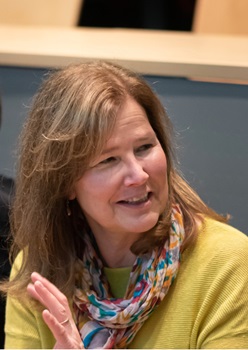 Jane Rech joined the Gates Center as a volunteer in January 2020, was hired as a full-time employee in 2021, and serves as Program Coordinator.

Jane obtained her bachelor’s degree with a double major in Chemistry and English from Williams College in Massachusetts. While an undergraduate, she played varsity field hockey and lacrosse and loved being a member of these teams. Jane later received a doctorate in Molecular Biology from Vanderbilt University in Tennessee. Moving to Denver thereafter with her husband, Chris Toll, she elected to stay home with their three children and multiple golden retrievers. During this time, she served on the Board of Trustees at St. Anne's Episcopal School for nine years and volunteered in a development capacity for St. Anne’s Episcopal School, Kent Denver School and Williams College. Additionally, she has volunteered at the Museum of Nature and Science, served on several parent boards and coached youth club lacrosse.

Serving as a volunteer at the Gates Center reignited Jane’s passion for science and her love of working with others to advocate for and support both individuals and educational institutions. Her exacting, gracious, and thoughtful contributions toward enabling the Gates Center to best serve its members, interns and programs have likewise fueled our collective enthusiasm at having her join the center officially.