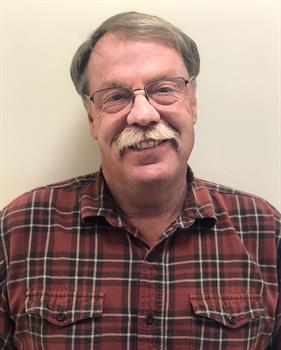 In September 2014, Charles “Charlie” Wall arrived to fill the position of lab manager for the Gates Center, bringing 26 years of experience working in academic or private science and a broad array of life experience to share. Born on an Air Force base in Kansas, Charlie grew up living across the western United States and joined the Navy at age 17. In the service for four years, he was stationed in Albuquerque, New Mexico, which he found to be absolutely wonderful, and was honorably discharged at age 21. Afterwards Charlie contemplated college but did not yet feel ready. Working for three years as an underground hard rock miner at the Henderson Mine in Empire, Colorado, however, convinced him that it was time to continue his education. Charlie subsequently arrived at the University of Colorado Boulder with a great interest in biology, nature, and the outdoors, and graduated with bachelor’s degree in Molecular, Cellular and Developmental Biology--a program that was new, high tech, competitive, and very promising.

After several years working in biotech in Los Angeles, Charlie moved back to Denver where he began moving professionally back and forth between National Jewish and the University of Colorado Health Sciences Center. Working at National Jewish in Gordon Keller’s lab was especially pivotal. Dr. Keller focused on mouse embryonic stem cells and hematopoiesis. Charlie and his current Gates Center colleague Saiphone Webb, who worked there too, felt as if they had gotten in on the ground floor of stem cell research!

Having worked since 2004 with Uwe Staerz, PhD, CSO as a research associate and scientist at Greffex Inc. in the Fitzsimons BioScience Park Center, Charlie has been thrilled to be in the position to support the science going on in the Gates Center labs and to see all that is being done to translate this work into human therapies. He sees tremendous potential for stem cell research in changing medicine as we know it. He also feels that it is wonderful to have resolved the controversy surrounding the use of embryonic stem cells by virtue of Yamanaka’s amazing 2006 discovery that enables the adult skin cells to be reprogrammed into an embryonic stem cell-like state and then differentiated into potentially any tissue of the body. Supporting the groundwork and the rigorous, controlled and essential manufacturing practices for something bigger than himself is very attractive to Charlie. He simply wonders what else will revolutionize this world and revels in the promise of all the young people with whom he now has the pleasure of working.

Outside of the lab, Charlie has a variety of interests, which mainly involve spending time in the outdoors and doing things with his hands. In the spirit of Gates Center Director Dennis Roop, Charlie enjoys gardening and cooking. He also enjoys backpacking and photography and participates in the Littleton Gem and Mineral Club, where he digs up material to use in his lapidary hobby. We are delighted to have someone of his experience in our Gates Center midst with all his talent and interests, besides!