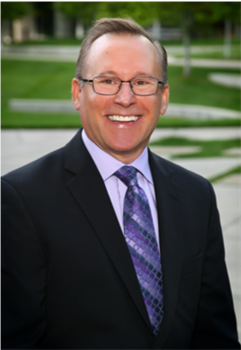 Mark Petrash, Ph.D., became Associate Director of the Gates Center as of July 1, 2017. He has served as the center’s 2015 internal self-study reviewer and as a key collaborator in the center’s successful partnership with the Department of Ophthalmology to raise $10 million to establish an ocular stem cell and regeneration program and recruit Valeria Cantor-Soler, Ph.D., as its director. Petrash has also been a longtime Gates Center member, a member of our Gates Grubstake Scientific Investment Advisory Committee (SIAC) and an enthusiastic mentor for our Gates Summer Internship Program since its creation in 2015.

A Texas native, Mark earned his B.S. in Zoology from the University of Texas, Austin, and his Ph.D. in Human Biological Chemistry and Genetics from the University of Texas Medical Branch in Galveston. Following a postdoctoral fellowship in the Department of Biochemistry at New York University, Mark became a research assistant professor of Ophthalmology at Emory University School of Medicine in Atlanta. In 1984, he and his family relocated to St. Louis, MO, where he joined the faculty of Washington University School of Medicine. Over the next 20 years at Washington University, Mark rose through the ranks to director of research and professor of Ophthalmology and Visual Sciences and professor of Genetics, prior to his recruitment to the University of Colorado Anschutz Medical Campus in 2008.

Mark is the recipient of numerous awards, including the 1988 Robert E. McCormick Research Scholar and 1997 Lew R. Wasserman Merit Awards from Research to Prevent Blindness, Inc., the 2000 Outstanding Faculty Mentor Award from Washington University’s Graduate Student Senate of Arts & Sciences and the 2012 Distinguished Service Award from the Association for Research in Vision and Ophthalmology (ARVO). During 2013-2019 he served on the Board of Governors of the ARVO Foundation for Eye Research, including three years as the board chair. In addition to his work as vice chair for research in the Department of Ophthalmology and associate director of the Gates Center, he also serves the wider Anschutz Medical Campus on the Research Track Steering Committee and Strategic Infrastructure for Research Committee (SIRC).

Mark and his wife Kelly have three grown children, two of whom have followed him into the world of medicine as a doctor and critical care nurse, respectively.