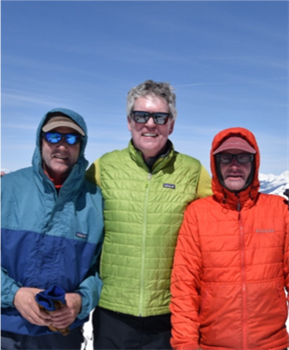 Dr. Brunvand (in the green vest) is one of the newer members of the Gates Grubstake Scientific Investment Advisory Committee, but is a long-term Colorado resident and committed to innovation within the state. He graduated from the University of Colorado Health Sciences University with honors and then completed his residency in internal medicine at CU. After his residency he was a fellow in the Laboratory of Immunoregulation under Dr. A.S. Fauci from 1985-88. He subsequently completed his clinical and laboratory fellowship in stem cell transplant at the Fred Hutchinson Cancer Research Center, staying there on faculty until 1995.

In 1995 he moved to Portland, Oregon to set up the Unrelated Donor Program for allogeneic stem cell transplants at OHSU. The OHSU program grew from ~15 transplants to >120 per year during his tenure. In 1997 he was recruited back to Denver to open the Unrelated Donor Program at Rocky Mountain Cancer Center. The RMCC BMT program grew under Dr. Brunvand’s allogeneic transplant expertise. At the same time, the access to a varied allogeneic stem cell sources met an unmet medical need in Colorado, that of safe, varied sources of allogeneic hematopoietic stem cell sources for stem cell transplantation in Colorado. The RMCC BMT Program grew into the Colorado Blood Cancer Institute in 2010 and the transplant volume increased from <20 per year in 1997 to >300 transplants per year by 2016 when Dr. Brunvand retired from clinical practice. To continue his career of innovation in cellular treatment of blood cancers, he became a Field Medical Director for Chimeric Antigen Receptor T-cells (CAR T-cells).

Dr. Brunvand has had a varied career full of innovation in immunology, cell therapy and blood cancer treatment. He volunteered this unusual “head shot” taken when he and two friends from his ski patrol days during his medicine residency “skinned” up Quandary Peak. What makes this photo unusual is that the friend in blue is a 35-year survivor of Hodgkin Lymphoma which was diagnosed and treated by Dr. Brunvand during his residency. The friend in the red, received 2 allogeneic stem cell transplants for myelodysplasia from Dr. Brunvand. Both patients have recovered well enough to ski up and down a 14,000-foot peak during winter! These guys are completely recovered from serious blood cancers and show the value of research into treatments to allow patients to reclaim their lives.