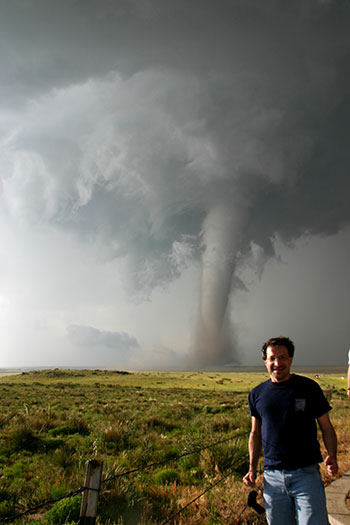 (April 2019) Meteorology and medicine might not seem a natural pairing, but for Jason Persoff, MD, the similarities between the two are plain to see.

“Medicine and meteorology overlap for me,” said Persoff, associate professor of medicine for the CU School of Medicine and hospitalist at UCHealth University of Colorado Hospital. “There’s an anatomy and physiology to a storm and both tap into my passion for complex thinking.”

With his knowledge as a storm chaser, Persoff is now able to help hospitals prepare better for unexpected disasters.

Persoff started his career in storm chasing nearly 30 years ago while attending the University of Colorado Boulder. With a nebulous understanding of weather systems, a handheld radio scanner, and more than enough reckless abandon, those first storms were trial by fire.

Racing down his share of dirt roads, stumbling into some dead ends, and making a few questionable decisions, Persoff has honed his skills as a storm chaser over the decades. Along the way, he’s captured spectacular photographs of severe weather events.

“I can get reasonably close,” he said. “Within a couple of miles, but I am always careful to keep a safe distance away.”

A telescopic lens coupled with the sheer size of the weather event would have you believe the storms are bearing down on Persoff. An average tornado can extend 2,000 feet from cloud base to ground, towering over the landscape around it. Although they may appear slow moving, tornadoes can travel between 30 miles per hour to 70 miles per hour, with the danger of changing directions abruptly.

Persoff’s passion for meteorology and medicine has always been inextricably linked with his love of problem solving, but one of the most destructive tornadoes in U.S. history truly combined his two passions into a single career.

On May 22, 2011, Joplin, Mo., was slammed by an EF5 tornado, the most severe category of tornado carrying wind speeds of over 200 miles per hour. The tornado decimated the town and wreaked catastrophic damage to St. John's Regional Medical Center.

Persoff had been tracking the storm that day. In a blog post, he recalls, “As we crossed over the Joplin town line, the tornado was busy spinning wildly at over 200 miles per hour, leaving behind a landscape that looked mowed down to its nubbins.”

Once the initial shock and awe passed through Persoff, he quickly got to work helping the injured. At Freeman hospital, the only hospital still standing, Persoff provided emergency care for dozens of patients over the course of a tireless 14 hours.

In the same blog post, he writes, “I learned humility beyond words at the reality of what a city’s worth of people were facing.”

For Persoff, this storm was transformative and a first-hand lesson on the importance of an emergency preparedness plan.

“The biggest problem is people believe it’s happened to the extent it’s going to happen in this area or a very normal psychological trick: ‘It’s never going to happen to me,’” he explains. “People don’t want to spend the time training for something that may never happen.” 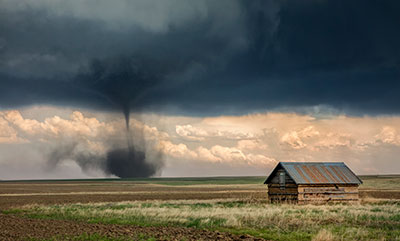 To counterbalance this human instinct, Persoff has spearheaded an initiative to integrate hospitalists into emergency management and incident response. Persoff and his colleagues elaborated in a review published in the October 2018 issue of the Journal of Hospital Medicine.

“[Emergency preparedness] has largely been ignored,” he said. “What we’re trying to figure out is how we make this structure flexible and approachable so everyone can be as successful as possible with the minimum amount of training.”

As Persoff puts it, streamlined chains of command help medical staff remain focused and well-utilized to better cope with disasters.

Although he’s worked since the Joplin tornado to develop these emergency response plans, he admits it’s still a work in progress with room for improvement.

“It takes time,” he says. “Everything that looks great on paper can fall apart.”

Nonetheless, Persoff has worked closely with administrators and colleagues at UCHealth University of Colorado Hospital to prepare for these emergencies: “Leadership has been tremendous at preparing the health system.”

He hopes to bring this level of preparedness to hospitalists across the country. In the meantime, Persoff continues to chase storms, capturing both the beauty and ferocity of nature. He warns any would-be storm chasers that chasing is fraught with danger and best left to the professionals.

Inexperienced storm chasers on the road can quickly face life-anddeath situations for themselves and for the first responders who may be called to care for them.