Sniffing Out Mysteries of the Olfactory System 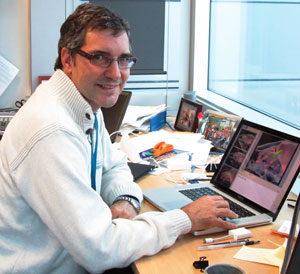 (May 2010) Ask most people which of their five senses they would give up if they had to and, chances are, they’d relinquish their sense of smell.

Diego Restrepo isn’t so sure.

“People tend to think this sense is not really important, but it is,” says Restrepo, , a professor of cell and developmental biology at the CU School of Medicine. “When you lose it, it can make a big difference in your life. And by better understanding this sense, we can learn a lot about other neurological systems.”

For the past 25 years, the Colombian-born biophysicist has been examining olfactory tissue from everything from catfish to rodents to humans in hopes of revealing the mechanism behind this oft-under-appreciated sense.

That work serves as a foundation for an array of potential applications: developing new treatments for anosmia (lack of a sense of smell) and spinal cord injuries; using easily accessible olfactory sensory neurons as a window into other neurological problems; even developing better systems for sniffing out bombs or detecting cancer. As co-director of the CU medical school’s new Center for NeuroScience, Restrepo says his mission is to bring scientists and physicians together, bridging the gap between basic research and clinical applications in hopes of improving the lives of those suffering neurological problems. In a sense, he’s been doing that his whole career.

“I was drawn to [the olfactory] field because it is one where, first, you have to look deep into the mechanism to see how things actually work—and it is not a trivial mechanism,” says Restrepo, who spent a decade at the Monell Chemical Sense Center in Philadelphia before coming to CU in 1997. “It’s interesting from the basic science and the clinical side, and I love both.”

Staring at a digital image of a mouse brain processing an odor, Restrepo still marvels at the complex system. Rodents, which identify their mates and family members by the smell of their urine, use about 5 percent of their genes to process scents. In humans, Restrepo says, that number is an “ ” 1 percent to 3 percent.

Mammals perceive smell when a molecule binds to one of 10 million to 20 million highly specialized olfactory receptors in the upper nasal passage, each encoded to perceive a certain subset of odors. The signal is then sent to the brain via one of many fragile axons nestled in a thin, bony plate called the cribriform. When those axons reach the olfactory bulb in the brain, they converge on one of 2,000 distinct relay stations called glomeruli, each also believed to encode for a subset of odors. Ultimately, the complex pattern enables us to distinguish between the sweet aroma of grandma’s cookies and, say, poisonous gas. 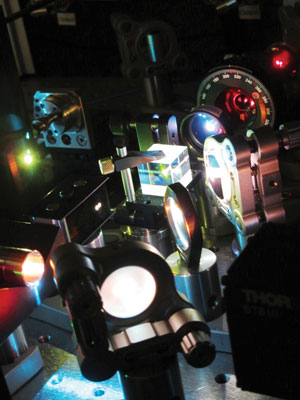 In the past two decades, interest in and understanding of this once-enigmatic system has increased considerably, with the 2004 Nobel Prize in Physiology going to Columbia University researchers Richard Axel and Linda Buck, of the Fred Hutchinson Cancer Research Center in Seattle, for their work to unravel it.

“It is something the military is very interested in,” Restrepo says, noting that work is at other institutions on an “electronic nose” to sniff out explosives, land mines and hazardous materials.

Scientists also have discovered that human tumors cause a change in body odor, detectable by either trained animal sensors or chemical techniques. Unlike other sensory neurons, buried deep inside the eye or ear, olfactory sensory neurons are easily accessible for research.

“You can look in someone’s nose, take a pinch of that tissue and they are not going to care,” says Vijay Ramakrishnan, MD, an assistant professor in the CU medical school’s Department of Otolaryngology. “You can’t biopsy someone’s retina or somewhere in their hearing mechanism and have it be of no functional consequence.”

As the only primary neurons in direct contact with the environment, olfactory neurons are constantly being damaged and regenerating themselves.

How that happens is of great interest to researchers of neurodegenerative disease. Restrepo is credited with expediting that research.

“He is the one who really pioneered a lot of the human biopsy studies, actually looking at human tissue as opposed to animal models,” says Beverly Cowart, , director of the chemosensory clinical research program at Monell.

Studies show that loss of a sense of smell can be an early, cardinal sign for numerous neurological problems, from Alzheimer’s to Parkinson’s to multiple sclerosis to depression. By examining the olfactory cells of patients with those diseases, and comparing them with healthy controls, Restrepo hopes to better understand the physiological underpinnings of those diseases and how to treat them.

For instance, researchers recently discovered that calcium signaling between cells was altered in olfactory receptor neurons of people with bipolar disorder.

“That could guide therapy toward treatments which change the way calcium is regulated in the cells,” Restrepo says.

Studies show that more than 3 million adults suffer from impaired taste and smell, often caused by head trauma that shears those delicate axons linking the nose to the brain, as well as by upper respiratory infections, nasal polyps or genetic disorders.

In addition, about half of seniors age 65 to 80 suffer loss of smell. This is no trivial loss, says Ramakrishnan. Our sense of smell heavily influences our sense of taste, he says, and if that goes, people may be disinterested in food, lose weight and get depressed.

also can alert people to danger—smoke, for example, or spoiled food. And is entwined with our memories.

“It reminds you of people, and places that give you a good feeling. When you lose it, your experience of that memory is ,” Ramakrishnan says.

Some people regain their sense of smell over time, but for those who don’t, there now are no medical solutions.

Ramakrishnan and Restrepo ultimately hope to help change that via a new collaborative research project looking at unique “olfactory ensheathing cells,” found only in the nasal cavity. The specialized cells are believed to be responsible for helping axons between the nose and the brain swiftly regenerate after injury. By spying on them as they do that, and establishing what the problem is when they don’t, researchers hope to develop treatments for restoring not only the olfactory sense but also other senses.

“Say you have a head injury or some trauma and you lose your sense of smell,” Ramakrishnan says. “I take a biopsy of your cells from inside your nose, take them to the lab and turn on various parts of them, and inject them back into your nose to facilitate resprouting of those olfactory nerves.”

Researchers around the country have begun similar experiments in spinal cord injury patients, using olfactory ensheathing cells to try to repair damaged nerve tissue. The problem: It works in some people but not in others.

“The question is why,” Restrepo says. “There is very little understanding about how these cells really work in the nose and our task is to better understand that.