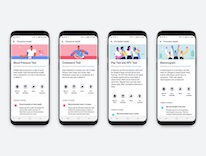 Facebook is taking a step toward leveraging its social media platform for public health. The social giant said it’s teaming up with four national medical groups to launch a preventive health tool offering tailored advice, the ability to set check-up reminders and other actionable information.

Joining Facebook in the initiative are the American Heart Association, American Cancer Society, American College of Cardiology and the Centers for Disease Control and Prevention. Their content, which has been vetted through scientific research, powers the tool’s recommendations and is conveyed in a digestible format.

“The goal here is to take the amazing wisdom of our partner organizations and deliver it in a consumer-friendly way to the pockets of our entire Facebook community so they can engage in its preventive health recommendations and advice and become their own health advocates,” said Freddy Abnousi, MD, Facebook’s head of healthcare, research, on Sunday evening at a briefing for the media at the HLTH event in Las Vegas.

Facebook also stressed that none of the information exchanged on the tool will be seen outside a small group of Facebook employees and that strict privacy and ad controls will be maintained.

The tool is accessible, as of this morning, by typing “preventive health” into the Facebook mobile app. After users enter their name and age, they receive what Abnousi said are tailored, evidence-based preventive measures meant to encourage dialogue with their primary care doctor.

For example, the advice for a 40-year-old man would include recommendations for a cholesterol test, blood pressure check and flu shot, given the season, along with definitions of these tests and answers to common questions. For a woman, it might involve a Pap test, HPV screen and a mammogram. Users can check off which tests they complete and when, as well as set reminder notifications for their next test, share the tool with others and access a find-a-doctor function which maps to federally qualified health centers.

As to why Facebook is partnering with those specific groups, heart disease is the No. 1 killer of both men and women globally. Monitoring blood pressure and cholesterol, exercising and eating healthy can make a profound impact on heart health.

The second-leading cause of death, and the leading cause of premature death, in this country is cancer. Forty-five percent of deaths can be prevented if people follow healthier behaviors, like avoiding tobacco.

Medical societies have tried to disseminate this information themselves through various means, including engaging providers, but “for some reason…that knowledge, those recommendations and the health benefits haven’t really reached as many people as perhaps they should or could,” acknowledged David Kao, MD, volunteer expert with the AHA and assistant professor at the University of Colorado School of Medicine.

The AHA wants to “reach patients where they are,” Kao said, “to empower them to understand and act on these recommendations without necessarily needing to hear them from a provider.” Social media, he said is a way to cut across socioeconomic, political and geographic lines.

Durado Brooks, MD, VP of cancer control interventions at the ACS, echoed that sentiment. Screening, Brooks said, contributes to a drop in cancer death rates, yet there are many populations that have higher rates of cancer and a lower likelihood of getting screened, such as those in certain rural areas of the country, those in lower socio-economic tiers and members of other ethnic and racial minority groups.

“The opportunity to reach people in new and different ways is important to the American Cancer Society,” he said.

Facebook pledged to ensure proper handling of the information. “From the beginning of [designing] this tool,” Abnousi said, “we’ve built privacy into every single decision we made.”

The platform raised eyebrows last year when, according to a CNBC report, it asked several major U.S. hospitals to share anonymized data about patients, such as illnesses and prescription information, for a research project that was aimed at helping the hospitals figure out which patients might need special treatment or care. The project was put on hold, according to the report, after the Cambridge Analytica data leak scandal led to concerns about how sites like Facebook collect and use info about Facebook users.

None of the information, such as tests or other measures recommended by the preventive-heath tool, are seen by Facebook’s partners or by Facebook itself, only by a restricted group of employees, Abnousi said. “What happens between you and your primary care practitioners stays there. We’re simply an information resource.”

Nor can any other Facebook user see if another member is using the tool. Data are stored securely and in a different way than other information and, the company added, no advertising is generated based on information gathered.

“When you’re within the tool and marking something as done, engaging with information or setting a reminder, you will never see an advertisement based on that information,” Abnousi said.

Kao called the effort a “great experiment” that, if successful, can pave the way for other public health efforts using social media.

“At a basic [level],” added Dipti Itchhaporia, MD, VP-elect of the ACC, “this is to save lives and to get out the prevention message.”