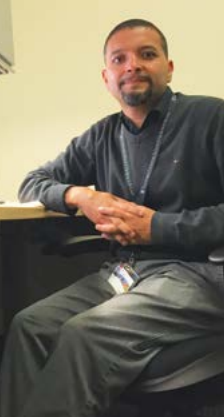 “If you want to be really successful, this is where you need to be,” Dr. Ramón Lorca stated.

Dr. Lorca was born and raised in Chile but his studies brought him to the United States in 2008. After finishing his PhD program in Chile, Ramón was offered a post-doctoral position at the University of Iowa, followed by Washington University in St. Louis two years later. Eventually, Dr. Lorca was awarded an American Heart Association Post-Doctoral Fellowship, which landed him a position as an instructor at the Moore Lab at the Anschutz Medical Campus, led by Lorna Moore, PhD, a founder of the Ludeman Center. Currently, Ramón is working to study how ion channels – certain proteins that regulate the electrical activity of the cells – affect the uterine vasculature during pregnancy, and how that relates to the pathological conditions of pregnancy observed at high altitudes.

Over the years, Dr. Lorca has sought a competitive environment where he could practice high quality science. The lack of scientific funding and resources in Chile ultimately led him to explore alternatives in the United States. “To give some perspective, a typical NIH (National Institutes of Health) grant might be 3 times the size of a grant you would receive for a similar project in Chile,” Dr. Lorca explained. It can take weeks to receive vital research supplies, which greatly lengthens the research process. “We didn’t have resources to waste. So in that sense, it gave me an idea of how to manage and maximize limited resources.” In addition, attaining a PhD is a challenging feat, and the shortage of fellowships exacerbates the issues of completing a program, and securing a job after you’ve finished. As he planned for grad school, Ramón had the opportunity to produce two publications while working in a lab for a few years, greatly boosting his chances of acceptance. Though it was difficult, Ramon was able to find a silver lining as he was facing these conditions. He was better positioned to think strategically and take a thorough approach to planning his research.

Part of the allure of moving to the states is the fact that there is a much greater investment in research than in Chile. As a recent recipient of the Faculty Development Award granted by the Ludeman Family Center for Women’s Health Research, Dr. Lorca is supported in producing research that he can build on throughout his career. “The push that the Ludeman Center gave me, with this grant, is the first step toward independence. Without it, it’s very hard to build momentum.” The Ludeman Center ensures that researchers have the opportunity to network and collaborate with other scientists and receive mentorship from senior researchers. “Mentorship is really important in the early years of your career and has been very helpful for me,” Dr. Lorca said. Together with his research, and the guidance he receives from his mentorship team, Dr. Lorca will soon be positioned to apply for larger grant funding opportunities that are necessary to strengthen his career.
Tags: CWHR Researcher Spotlight