"In giving to the Ludeman Center, we would honor Jacqueline and preserve her legacy by bringing systemic changes to women's health research. Jacqueline's gift to the world would be ensuring all women enjoy healthier, longer, more productive lives." 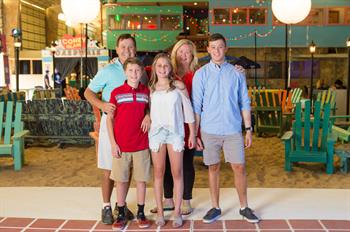 In 1998, Karen and Steve Leaffer were delighted to be starting a family and thrilled by the news that they would be welcoming twins. A sought-after corporate/tax lawyer, Karen worked at her demanding job until the last trimester of her pregnancy when she began experiencing severe shortness of breath and edema. While her obstetrician was not overly concerned about her symptoms, Karen knew that something was terribly wrong. After insisting, she was finally admitted to the hospital in dire cardiovascular distress. Karen presented in the final stages of congestive heart failure, caused by peripartum cardiomyopathy, a weakness of the heart muscle that leads to decreased blood flow to the body's vital organs. There was a high probability that Karen would not survive and her twins were also at great risk. Miraculously, Karen gave birth to beautiful twins, Jacqueline and Jacob, and she pulled through. The twins were cared for in a neonatal intensive care unit,but tragically, baby Jacqueline died two weeks after her birth.

In the wake of a health crisis, Karen found herself thrust into the daunting role of motherhood while coping with the loss of baby Jacqueline. At the same time, her serious heart condition had to be addressed. She embarked on a quest for information about peripartum cardiomyopathy and was determined to find out why her life-threatening heart condition had been missed. It seemed that everywhere she turned,she was dismissed by another doctor. Fortunately, that all changed when she met Dr. JoAnn Lindenfeld, an expert on cardiomyopathy and co-founder of the Ludeman Family Center for Women's Health Research. "Dr. Lindenfeld was intense, brilliant, caring and compassionate. She treated me with dignity and restored my confidence in the medical system," said Karen.

Through Dr. Lindenfeld, Karen learned that there was a substantial lack of research about all types of cardiovascular disease in women - not just peripartum cardiomyopathy. In fact,women were at that time still being systematically excluded as subjects in research studies. There was an assumption that what was learned from research on men, could be applied to women as well. Karen found this to be an appalling social injustice - one that cost her daughter in her life. Karen and Steve committed themselves to trying to correct the wrong, turning their family's tragedy into a gift of hope for other mothers and daughters.

Dr. Lindenfeld introduced Karen and Steve to the Center for Women's Health Research which was still in its infancy stage. The Ludeman Center's mission of research, education, and mentoring of young scientists with a focus on cardiovascular disease and diabetes struck a chord with the couple. Karen't ongoing search for information surrounding the details of her own illness had uncovered a flawed system and the Center was addressing it head on. After a thoughtful process,the Leaffers made the first major gift to the Ludeman Center, infusing it with the critical start-up funds it needed. The meaningful gift from the Leaffers was matched by the newly formed Ludeman Center Advisory Board within one week. "In giving to the Ludeman Center, we would honor Jacqueline and preserve her legacy by bringing systemic changes to women's health research. Jacqueline's gift to the world would be ensuring all women enjoy healthier, longer,more productive lives," Karen shared.

Since the initial gift in 2005, the Jacqueline Leaffer Foundation has continued to support the Ludeman Center with a focus on critical research on cardiomyopathy and heart failure and is currently supporting the work of Ludeman Center cardiologist David Kao, MD, whose bioinformatics research analyzes large data sets to look for risk factors in heart disease and peripartum cardiomyopathy. "Jacqueline died because of inequalities in women's health research. Now after just 15 years, the Ludeman Family Center for Women's Health Research and Dr. Kao are actively pursuing the answers we attempted to fund more than a decade ago. We have seen the Ludeman Center's evolution and take great pride in being part of a pivotal moment to bring about change."

In addition to being a busy mother, Karen is also managing partner of Leaffer Law Group, a firm providing legal counsel to support, advance and guide the work of nonprofit organizations and charitable foundations in Colorado. Karen and Steve remain involved in and generously support the Ludeman Center. "The message is getting out. We are closing the knowledge gap in women's health research and changing women's health. Information, however, must continue to be applied to make a difference, so we still have work to do. After all, the lives of our sister, mothers and daughters depends on it."